"Korean carmakers have generally provided good quality vehicles at competitive prices compared to rivals such as Toyota and Volkswagen. But they are being pegged into a high-cost and low-efficiency frame where wages do not reflect actual productivity," Jeong Marn-ki, president and CEO of the Korea Automobile Manufacturers Association (KAMA), told Yonhap News Agency on Friday. 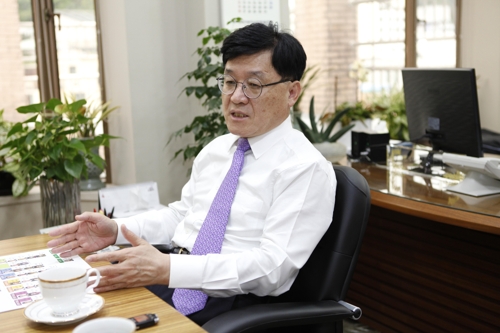 To support his claim, he gave a comparison of the salary levels between Korean carmakers and their Japanese and German counterparts.

He cited KAMA's analysis of the carmakers' annual financial statements.

"The higher pay doesn't make a lot of sense given Korea's per capita gross domestic product of around $30,000 is actually lower than the corresponding $40,000-$50,000 figures for the other two countries."

The five automakers spent 12 percent of their overall sales to pay salaries in 2017. This is higher than 10 percent at Volkswagen and six percent at Toyota, the analysis showed.

GM shut down one of its four car assembly plants in Korea in May last year as its utilization rate fell to 20 percent.

The KAMA CEO argued that the companies barely kept their production lines open even though subcontractors sold products at competitive prices and provided on-time delivery of parts, making it easier to control costs.

"If the shortened 52-hour workweek and higher minimum wages are applied to subcontractors as well in the coming years, executives at carmakers will be hard pressed to find legitimate reasons to maintain operations in Korea," he said.

The Moon Jae-in government introduced the shortened workweek for companies that hire 300 employees or more in July of last year.

Jeong, meanwhile, called on the government to not be in a hurry to raise minimum wages going forward. The executive then argued that concerted efforts need to be made to give greater flexibility to the country's labor market.

"Lack of flexibility really matters. For instance, Hyundai and Kia are required to consult with their unions to decide on which plant a new model will be produced in and the allocation of models between assembly lines. Without approval from the union, the production won't take place," Jeong said.

"This kind of arrangement makes it hard for carmakers to respond rapidly to any changes at the right time."

Hyundai and Kia, which together form the world's fifth-biggest carmaker by sales, sold a total of 1,670,290 vehicles in the January-March quarter, down 1.5 percent from 1,694,884 units a year earlier.

On top of high wages, low productivity and lack of flexibility in labor markets, local carmakers have to deal with mounting competition from imported vehicles and the growth of Chinese rivals, Jeong said.

Foreign carmakers sold a total of 52,161 vehicles in the first quarter, claiming a solid 15 percent of the domestic passenger car market, according to figures provided by the Korea Automobile Importers and Distributors Association. In the long term, the association chief warned that Chinese carmakers will pose the biggest threat to Korean carmakers.

"There are some 70 carmakers in China. They pay an average of 17 million won per employee in their plants. Most of the workers are in their 20s and 30s. They now focus on 'new energy vehicles,' which means all-electric and hydrogen-powered cars," he outlined.

He predicted that while the Chinese automobile market stands at around 28 million vehicles per year, the overall size will shrink over time, with Chinese carmakers looking to expand overseas.

"Korean carmakers may lose further ground in the global markets as they cannot beat Chinese rivals in terms of prices," he said.