WASHINGTON, April 30 (Yonhap) -- A former U.S. envoy on Tuesday slammed North Korea as a "corrupt mafia state" after it emerged that the regime billed the U.S. $2 million dollars for the hospital care of an American detainee in 2017.

Ambassador Robert King, who served as the State Department's special envoy for North Korean human rights issues from 2009 to 2017, issued a blistering attack on the North in the wake of last week's report by The Washington Post on the bill, which has since been confirmed by former and current U.S. officials.

"Why does North Korea detain U.S. citizens?" King wrote in a commentary for the Center for Strategic and International Studies. "Why does it engage in the petty thuggery of arresting and detaining U.S. citizens and charging some Americans huge hospital bills for medical treatment that was required because of how they were treated while they were imprisoned?" 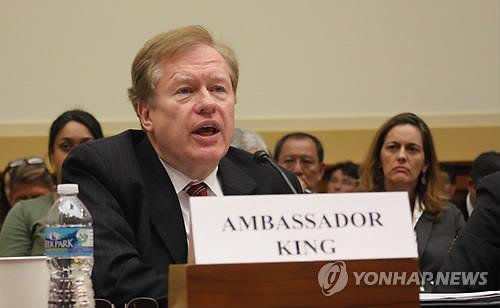 The bill concerned the hospitalization of Otto Warmbier, an American college student who fell into a coma shortly after he was detained in Pyongyang in early 2016. He was released and flown back to the U.S. in June 2017, but he died shortly thereafter.

U.S. President Donald Trump responded to the report by saying that no money was paid to the North in connection with Warmbier's release.

King offered a two-part answer to his questions, noting that he negotiated the release of an American detainee from North Korea in 2011.

"First, North Korea is a corrupt mafia state," he said. "Bribes, corruption, and crime are key to understanding the Kim regime, now with its third generation family 'godfather.'"

The medical bills, he said, are "simply a way to pick up extra cash, and totally consistent with the corrupt mode of operation in Pyongyang."

Detaining U.S. citizens also serves to demonstrate the North's ability to provoke the U.S., which it views as preventing its forcible reunification with South Korea, King added.

He explained that the U.S. is pressured to deal with North Korea in such cases because of the concern of victims' families.

"Thus, North Korea keeps needling and harassing the U.S. diplomatic agenda by mistreating U.S. citizens," he said. "The bottom line is that the detention of U.S. citizens in North Korea is part of a corrupt effort to increase the regime's perceived standing, to garner international attention, and even to make a bit of money from excessive hospital fees. It serves to emphasize again the Mafiosi nature of this rogue regime."