SEOUL, May 1 (Yonhap) -- South Korea's exports dropped 2 percent in April from a year earlier, extending their on-year fall for the fifth consecutive month due to a drawn-out slump in chips and weak demand from China, government data showed Wednesday.

Outbound shipments came to US$48.86 billion for April, down from the $49.85 billion tallied a year earlier, according to the data compiled by the Ministry of Trade, Industry and Energy.

Imports, on the other hand, moved up 2.4 percent over the cited period to $44.74 billion, the ministry added.

South Korea's trade surplus came to $4.12 billion in April, marking 87 straight months in which the country's exports have exceeded imports.

The overall decrease was attributable to the falling price of chips and weak demand, with the sluggish Chinese economy also weighing down on South Korea's outbound shipments, the ministry said.

The ministry said the decelerating pace of the country's outbound shipments has eased to some degree, which may signal a slight improvement down the road. The country's exports dropped 8.2 percent from a year earlier in March and 11.4 percent in February.

In detail, South Korea's outbound shipments of chips fell 13.5 percent on-year in April to reach $8.4 billion on weak demand from China and data centers, taking up around 17 percent of the monthly exports.

Exports of petrochemical products and steel also moved down 5.7 percent and 7.7 percent over the cited period to $3.89 billion and $2.65 billion, respectively.

Outbound shipments of automobiles, on the other hand, rose 5.8 percent to $3.75 billion.

Shipments to the United States moved up 3.9 percent to $6.17 billion on the back of strong demand for South Korean automobiles, as well as 5G network equipment.

Exports to Japan surrendered 8.2 percent to $2.27 billion on falling demand for steel and petrochemical products, the data also showed.

"Although the decelerating pace of the country's outbound shipments has eased despite the slowing global economy coupled with the trade dispute between the U.S. and China, the trade environment still remains challenging," Industry Minister Sung Yun-mo said.

Sung added that the government will roll out policies that can speed up efforts to find new growth engines for Asia's fourth-largest economy, including non-memory chips and next-generation automobiles. 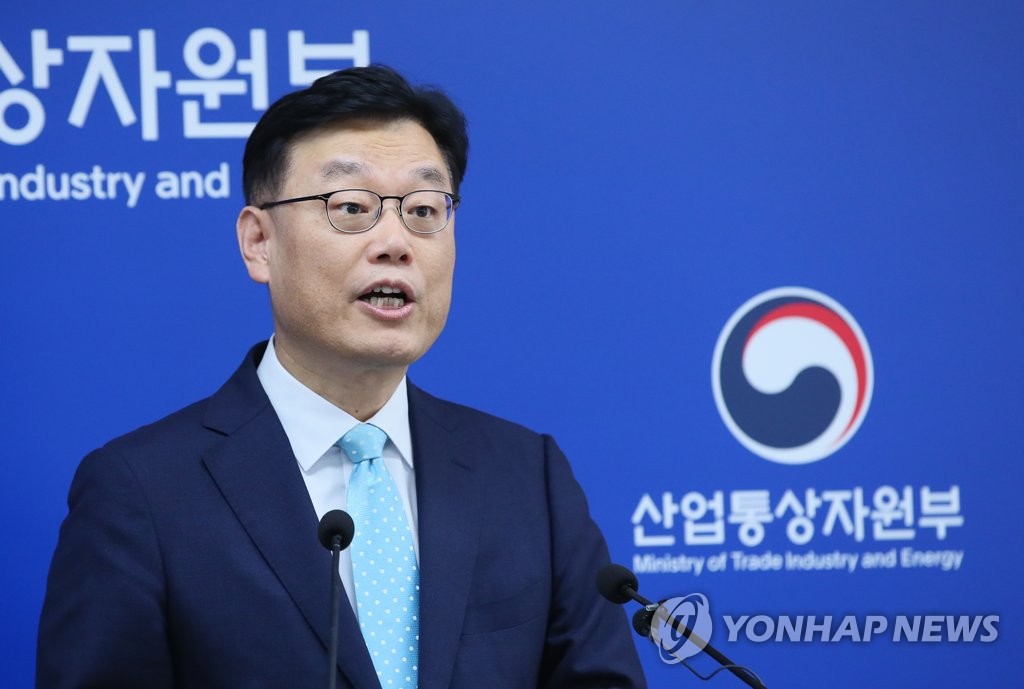 Earlier this week, the South Korean government vowed to build up its non-memory chip industry by fostering foundry and fabless firms in line with its goal of becoming a global semiconductor powerhouse by 2030.

The government plans to announce similar goals for the automobile, bio-health and materials industries in the near future, along with other sets of programs for startups and small and medium-sized companies.

For the remaining 2019, experts said South Korea's exports will rebound.

"(South Korea's) exports are expected to improve further in the second quarter compared with the first three-month period," said Park Tae-sung, who heads the Office of International Trade and Investment of the ministry.

Park expected South Korea's exports to recover further once chip prices rebound, and the Chinese economy gets on a growth track later in the year.

"Amid signs of the global economy improving, demand for chips will grow in the second half," also said Moon Byung-ki, a researcher at the Korea International Trade Association.