SEOUL, May 1 (Yonhap) -- South Korean Foreign Minister Kang Kyung-wha said Wednesday that Seoul and Washington are pursuing the same goal of North Korea's denuclearization despite a "tug of war" over the method to reach that goal.

Speaking at a lecture on peace, Kang said that the views of the allies can't necessarily remain the same, but stressed the importance of bilateral cooperation to address differences and speak with "one voice."

Speculation has lingered that Seoul and Washington may be at odds over how to approach Pyongyang's denuclearization, with the latter keeping a tough stance and the former seen as more flexible in working to facilitate the resumption of nuclear talks between the U.S. and the North. 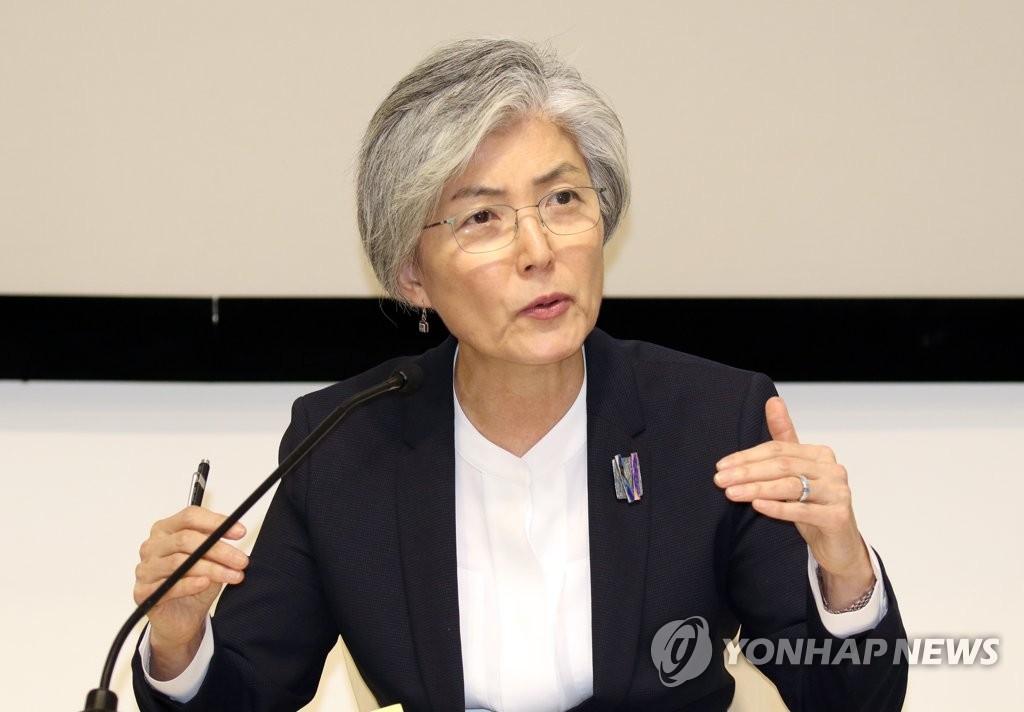 "The basic approach of the allies is to reach an agreement with the North under a comprehensive approach and the enforcement cannot help but proceed in steps. Thus we cannot help but move toward denuclearization simultaneously and in parallel, and that is the same between the allies," she added.

The nuclear negotiations between Washington and Pyongyang have been stalled since the second summit between U.S. President Donald Trump and North Korean leader Kim Jong-un in Hanoi in February collapsed due to a failure to narrow differences over the scope of the North's denuclearization and the U.S.' sanctions relief.

Kang noted that the Hanoi summit broke down as Pyongyang presented an approach entirely different from that of the U.S.

"Though (the two sides) did not reach an agreement in the end, as the North brought in an entirely different approach, (they came to) have a clear understanding of what each other's position is," she said.

"Should the talks resume, there would be more in-depth negotiations," she added.

The U.S. has been pushing for a comprehensive approach that calls for Pyongyang's sweeping denuclearization steps before any rewards are given, while the North favors a step-by-step, incremental formula that offers rewards along the path to its nuclear disarmament.

During the lecture, she also made clear that Seoul's policy toward Pyongyang is aimed at "peaceful coexistence" with the North, not at achieving reunification.

"Peaceful coexistence should first materialize," she said in response to a question of whether reunification should take place.

"Then the armistice agreement should be replaced by a peace treaty, and when the mood for peaceful coexistence is entrenched, discussions for unification may naturally emerge," she added.