(ATTN: UPDATES throughout with latest info)

SEOUL, May 2 (Yonhap) -- BTS picked up two prizes at this year's Billboard Music Awards (BBMA), including the much-coveted Top Duo/Group, becoming the first K-pop artists to win more than one award in a single event.

The septet received Top Duo/Group and Top Social Artist at the 2019 BBMAs at the MGM Grand Garden Arena in Las Vegas on Wednesday (U.S. time).

It marks the third consecutive year BTS has captured the fan-voted Top Social Artist award, but it is their first time winning in a major competition category. 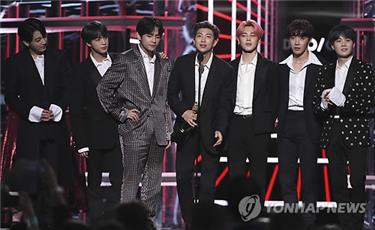 With the victories, BTS also became the first Korean musicians to win more than one honor at the annual event after rapper Psy won Top Streaming Song in 2013 with his globally sensational single "Gangnam Style."

BTS competed with four other groups -- Dan + Shay, Imagine Dragons, Maroon 5 and Panic! At The Disco -- for the Top Duo/Group prize.

"(We) still can't believe we are here on this stage. It was only possible because of the little things we shared together, the BTS and ARMY power, right?" RM said, his voice full of emotion.

"We are still the same boys from years ago, still have the same dream ... and thoughts. Let's keep dreaming the best things together," he said, referring to their debut six years ago. 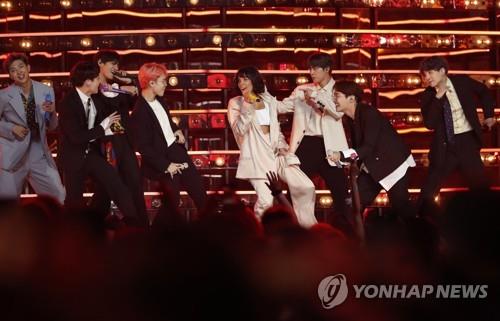 As if to testify to the band's explosive popularity and selling power, BTS staged its latest single "Boy With Luv" 14th out of the show's total of 15 performing artists and teams, after performances by such legendary artists as Madonna and Mariah Carey.

It was BTS' first joint stage performance with American pop star Halsey after she joined the recording of "Boy With Luv" and appeared in its music video.

Halsey joined the band onstage upon the single's refrain, appearing first in a black outfit and then changing into a white stage costume, and blended comfortably into the funky beats and choreography.

This was after Kelly Clarkson, a singer who emceed the show for a second year, presented BTS as "shattering nearly every streaming record imaginable."

It was a major moment in the band's audacious strides toward the very center stage of the U.S. as well as the broader global music scene. 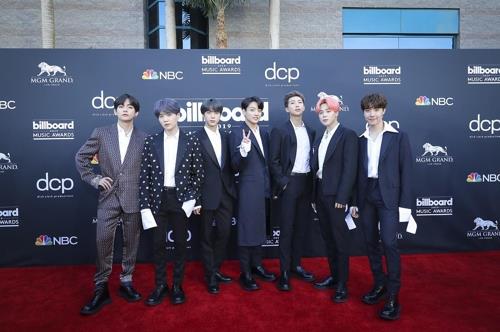 "BTS won the award after (succeeding) through their own unique ways, without using gimmicks to enter into the mainstream, and this sends out an important message to the entire music industry across the world," K-pop pundit Kang Myung-suk said while co-hosting the local live broadcast of the show.

Kim Young-dae, a K-pop commentator and author of "BTS: The Review," called the award event "a historic moment in which the success of K-pop won official recognition from the American mainstream pop market."