SEOUL, May 2 (Yonhap) -- Police said Thursday they are investigating former BIGBANG member Seungri on allegations that he embezzled funds from a night club embroiled in drug and sex scandals.

He is suspected of having misappropriated money at Burning Sun, a club in southern Seoul where he worked as a public relations director.

The club closed down in February after it came under investigation over drug use, sexual violence and corrupt ties with district police.

The Seoul Metropolitan Police Agency (SMPA) said it has summoned Seungri for questioning over allegations that he embezzled 200 million won (US$172,000) by having Burning Sun pay the money to another club, co-founded by him and a businessman, to use its brand.

In a related probe, police are looking into Yoo In-suk, a former head of Yuri Holdings, a company co-founded by Seungri and other Burning Sun investors. They are suspected of having embezzled around 2 billion won in total.

Seungri, 29, has also been under probe over allegations that he arranged sex services for potential foreign investors at Seoul night clubs and was involved in running the crime-riddled Burning Sun club.

He is one of a number of entertainers who allegedly shared sex videos of about 10 women secretly filmed by singer Jung Joon-young in a mobile chat room.

Jung is now in jail over allegations that he recorded sex videos of the women he slept with and uploaded them to the KakaoTalk messenger chat room. 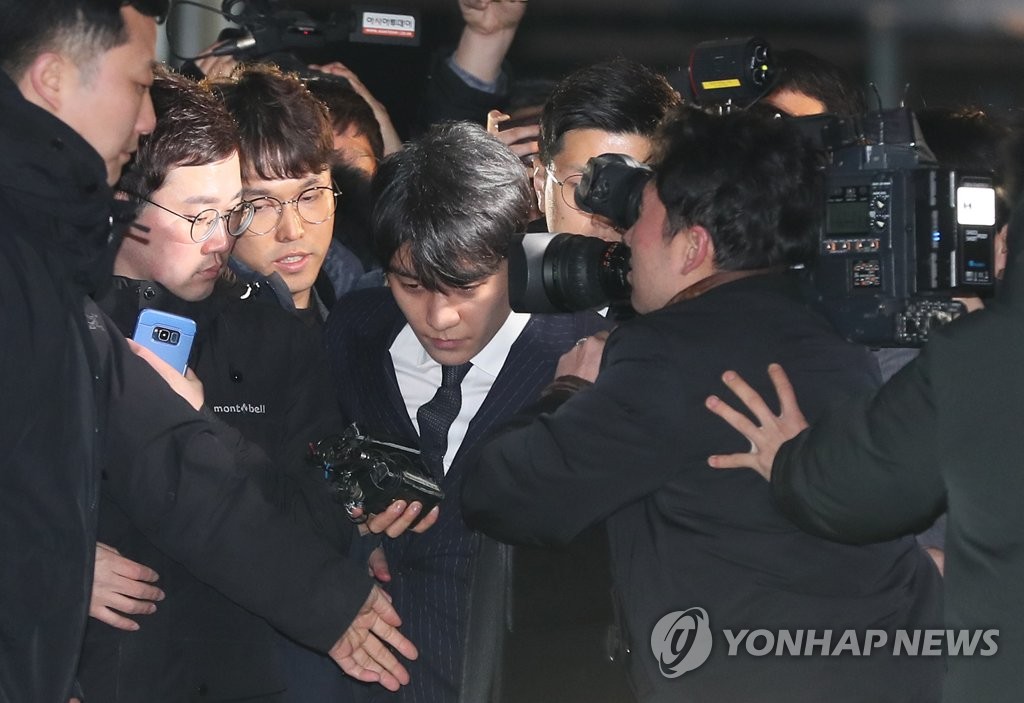 In a related investigation, meanwhile, officials at the SMPA said they have confirmed some Japanese businessmen related to Seungri received sexual services during their visit to Seoul in 2015.

"Some in a group of Japanese businessmen who accompanied their chairman were found to have bought sexual services during their visit to South Korea in 2015, though there was no evidence of illegalities by the chairman who came here together with his wife," a police official said.

The official added the police will determine how to investigate the Japanese people implicated in the suspected prostitution.

Police opened their probe into suspected prostitution involving Seungri, after a group SNS conversation between the singer and Yoo in November 2015 indicated they were preparing a "special party" and girls for visiting Japanese guests.

Police suspect Seungri's arrangement of sexual services after confirming he paid the Japanese visitors' accommodation fee at a Seoul hotel with a corporate credit card of his former management company YG Entertainment.

Police questioned YG accounting officials, but they insisted that Seungri paid back the accommodation fee later in accordance with the company's accounting practices.

Police said they will later determine whether to seek an arrest warrant for Seungri and Yoo on pimping charges after conducting a further investigation into their suspected provision of sexual services.