(ATTN: UPDATES with details of meeting in paras 11-15)

NADI, Fiji, May 2 (Yonhap) -- South Korea's chief economic policymaker said Thursday that the country's economy will likely recover in the second half of this year, but warned that this year's export growth may be lower than expected on lackluster global demand.

China's economic slowdown and waning demand for Korea's technology products, particularly for memory chips, were blamed for the shrinkage of exports.

As companies have started increasing investment and a boost in government spending is expected to prop up the economy, Seoul's finance minister, Hong Nam-ki, said the economy would begin entering a recovery phase in the second quarter. 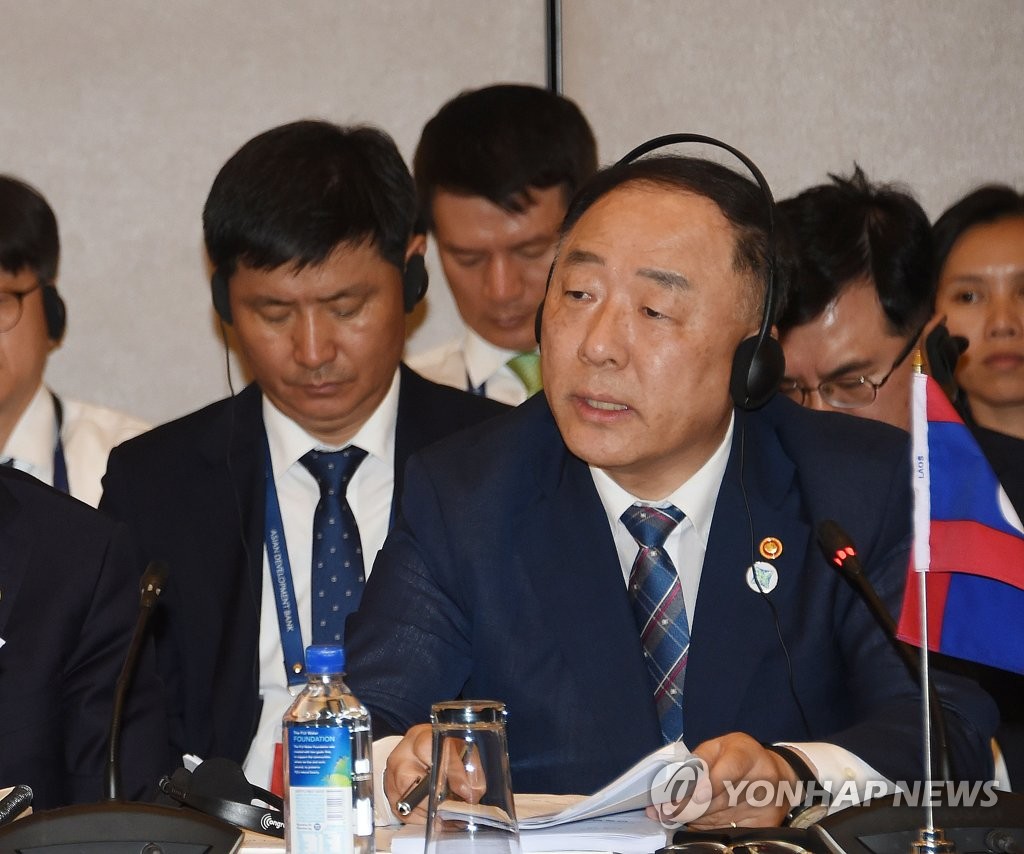 However, Hong said it will be difficult for South Korea to maintain this year's export target because of a slowdown in the global economy. Last year, South Korea shipped US$606 billion worth of products.

Hong was speaking to reporters on the sidelines of a meeting of finance ministers and central bank governors from South Korea, China, Japan and the 10-member Association of Southeast Asian Nations (ASEAN) in Fiji.

Hong said he plans to meet chief executives of big companies this month and next month to encourage them to boost investment.

"For our economy to overcome its difficulties, big companies must significantly expand their investment," Hong said.

Earlier this week, President Moon Jae-in made his first visit to a local factory of Samsung Electronics Co. since taking office in May 2017.

The visit was meant to demonstrate the government's resolve to promote non-memory chips as a future economic growth engine for the country, along with bio-health and next-generation automobiles.

Also Thursday, Hong and his counterparts from China, Japan and ASEAN, as well as central bank governors in the region, reaffirmed their commitment to uphold the rule-based multilateral trading system and open regionalism, while resisting all forms of protectionism.

The participants agreed to work together to strengthen the resilience and robustness of the regional economy to contribute to strong, sustainable, balanced and inclusive global growth.

"While the region is not immune to threats of trade protectionism, the impact would be partly mitigated by robust regional consumption and growing intra-regional trade," they said in a joint statement released at the end of their meeting.

"We continue to remain vigilant against the downside risks that may heighten the region's vulnerability to shocks," the statement said.