SEOUL, May 2 (Yonhap) -- Four lawmakers of the main opposition party had their heads shaved Thursday in protest against the ruling party's drive to win early parliamentary passage of a set of controversial reform bills.

In South Korea, such hair-shaving is used at times as a show of dissent, largely on political and social issues.

The conservative Liberty Korea Party (LKP) is fiercely protesting the votes at a couple of special parliamentary committees earlier this week to place the bills on a "fast track." The proposed legislation is meant to modify the electoral system, create an independent probe unit on corruption by senior civil servants and grant more authority to police. 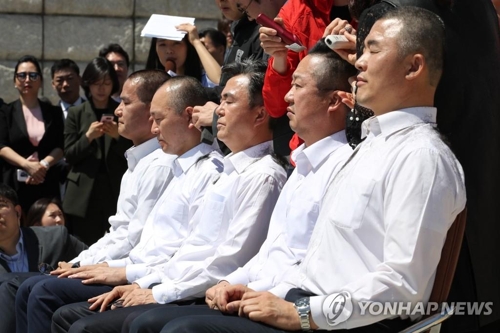 The ruling Democratic Party (DP) joined hands with three minor opposition parties to put the bills on the fast track, enabling them to speed up the handling of the bills.

The LKP says the move reflects an attempt to impose "tyranny" by what it calls the leftist Moon Jae-in administration.

In particular, the bill on electoral reform is designed to expand the proportional representation system in a bid to restrain the country's endemic regionalism.

The LKP views it as especially disadvantageous to the party, as it has a firm support base in the southeastern provinces of North and South Gyeongsang. The next general elections are slated for April 15, 2020.

The DP is apparently more interested in the other bills on reforming the prosecution, which critics say has excessive authority and power.

In search of the minor opposition parties' support for the bills, the DP has agreed to help facilitate the passage of the electoral reform bill.

Holding the hair-shaving ceremony in the National Assembly compound, the LKP characterized it "non-violent resistance."

A day earlier, another LKP lawmaker, Park Dae-chul, had his hair shorn off.

The collective action "symbolizes non-violent resistance to stand up against the tyranny of gigantic power," the party's spokesperson, Rep. Jun Hee-kyung, said.

Rep. Kim Tae-heum, who got his head shaved, argued that the fast-track move represents the Moon government's declaration that it would take the path of "leftist tyranny" in earnest and create a "highway" for it.

The DP urged LKP lawmakers to return to parliamentary sessions, pointing out a host of bills remain pending on improving the living of the people at a time of economic difficulties facing the nation. The government has also proposed supplementary budgets.

"The duty of political parties and parliamentarians is to prioritize the national interest," the party's floor leader, Rep. Hong Young-pyo, said.

The LKP is neglecting its responsibility as the main opposition party, he added.