Ban, who took office as chief of the National Council on Climate and Air Quality early this week, said at the National Assembly that a blame game with China won't be desirable in resolving the fine dust problem.

Chinese President Xi Jinping was also well aware of the serious fine dust problem faced by South Korea and stressed the importance of bilateral cooperation, Ban said, reflecting on his meeting with the Chinese leader in Beijing last month.

Ban made the remarks during his meeting with Kim Hak-yong, head of the National Assembly's Environment and Labor Committee, at the latter's office. 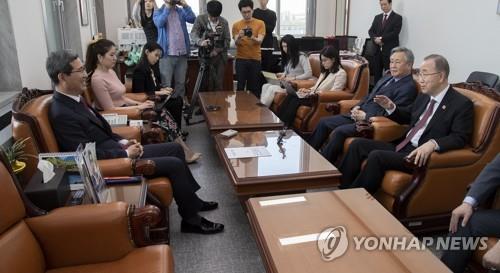 "China's rapid economic development and its rise to the world's second-largest economy have left behind many harmful effects on the environment. Today, our country as well as China suffer damage," Ban said.

"When I met Chinese President Xi last month, I found he took the matter very seriously. He was also well aware of various circumstances faced by Korea, and we had a broad talk about cooperating with each other," Ban said.

Noting he may have an opportunity to visit China again in June, Ban said he plans to hold concrete consultations with China's environment-related ministers if the visit is realized.

Ban said his council plans to hold a forum of domestic experts on the fine dust pollution problem and a town hall meeting with about 500 selected citizens during this month.

In response, Kim, who belongs to the main opposition Liberty Korea Party, called for South Korea's own efforts to reduce fine dust particles before opening negotiations with other countries over the matter.

"About half of fine dust particles in South Korea come from China, but it's not a matter limited to the two countries. The solution should be sought through multilateral negotiations among several Northeast Asian countries," Kim said.

Ban also met with Lee Hae-chan, chairman of the ruling Democratic Party; Sohn Hak-kyu, the chief of the minor opposition Bareunmirae Party; and Lee Jeong-mi, leader of the Justice Party, to listen to their views on the major environmental issue. 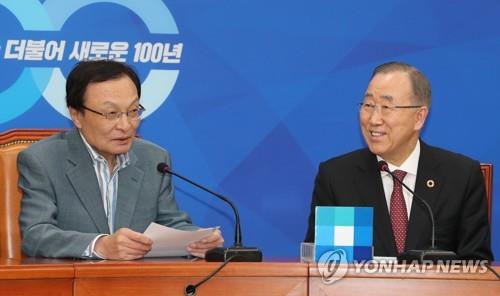 Ban's council set sail Monday, tasked with providing the government with policy recommendations on how to tackle fine dust pollution and exploring ways to cooperate with neighboring countries.

South Korea designated fine dust as a social disaster in March as the intensity and frequency of the air pollution has increased in recent months. A large portion of the fine dust is believed to blow in from China.

President Moon Jae-in earlier asked Ban to help the government address the issue and appointed him the head of the agency. Ban played a key role in producing the Paris climate accord in 2015.