The companies blamed lower demand in major markets, such as China, for their lackluster sales results last month. They didn't expect any strong upward momentum in the market with the trade dispute between the United States and China under way. 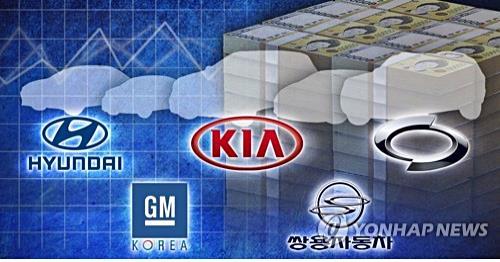 Hyundai and Kia, the country's two biggest carmakers, didn't report any significant rebound in sales last month due to low demand in the United States, China and emerging markets.

Robust sales of the all-new Santa Fe and the Palisade SUVs in the domestic market didn't give a major boost to the monthly sales results.

This year, Hyundai and Kia said they will focus more on reviving sales in the U.S. and China, the world's two biggest automobile markets, by launching new SUV models.

In particular, Hyundai Motor expects the flagship Palisade SUV and the all-new Sonata sedan, set to be launched in the U.S. later this year, to help buoy sales.

Early this year, Kia began to sell the Telluride SUV, a model designed only for North American markets, in the U.S. It has received a strong response from local customers.

But a slowing global economy and the trade dispute between the U.S. and China remain major woes for car manufacturers.

The two carmakers have set a conservative target of 7.55 million vehicles for 2019, a little higher than the 7.4 million units they sold last year.

They have been struggling with a decline in sales in the U.S. and China as they were not quick to recognize consumers' growing appetite for SUVs.

But Renault Samsung did not show any signs of a recovery in sales. Its sales plunged 41 percent on-year to 13,720 from 23,096 due to lack of new models. A months-long dispute with its union over wages and working hours already caused production losses of over 14,000 vehicles.