SEOUL, May 2 (Yonhap) -- President Moon Jae-in said Thursday he won't give up efforts for dialogue with opposition parties and other critics of his policies, while expressing regret about intensifying political stand-offs here.

He made it clear that his liberal administration is not intervening in ongoing investigation by state prosecutors into what was done under the former Park Geun-hye administration.

He was speaking at the outset of a two-hour luncheon meeting with a dozen elder statesmen and stateswomen at Cheong Wa Dae, intended to garner their advice, ahead of the second anniversary of his inauguration next week.

"What's most difficult (in my presidency) is the phenomenon of political confrontation intensifying," he said, according to Cheong Wa Dae spokesperson, Ko Min-jung. 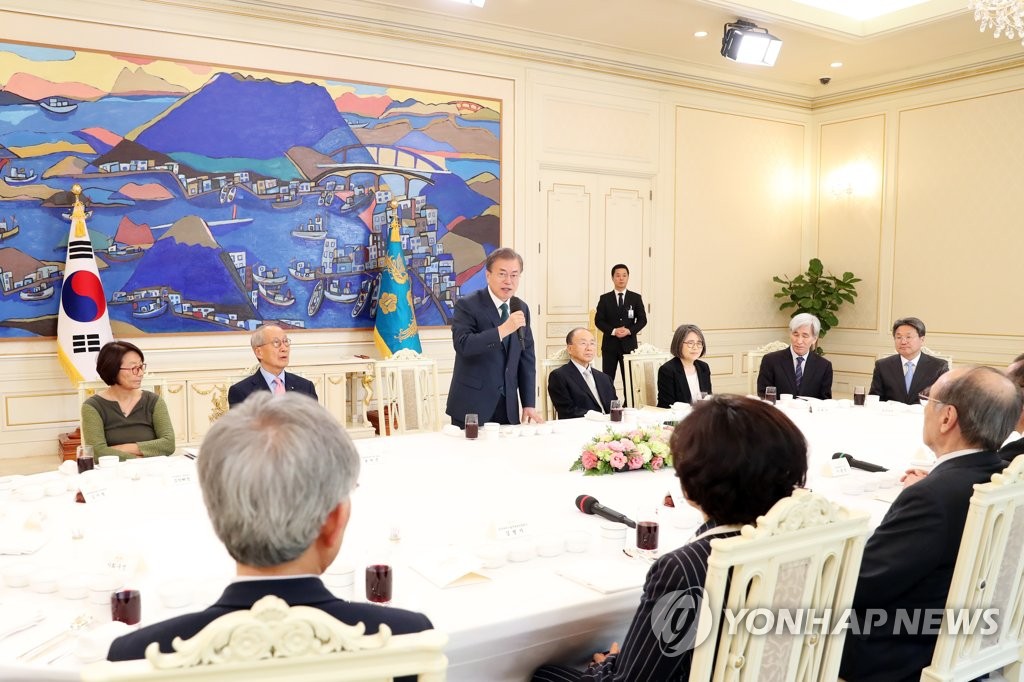 It's also worrisome that animosity has been deepening between people with different ideologies, he added.

Moon stressed that he has striven for talks with his political opponents and that he will keep trying to do so.

Regarding the controversial probe into alleged wrongdoings by the conservative Park government, the president said some are calling for a halt to a relevant probe and a push for national unity.

But he added his administration "can't control" the prosecution's move.

He was also quoted as saying, "In my personal view, (if the allegations are true) it's very seriously unconstitutional and hard to compromise (on the issue with critics)."

Park is standing trial for more than a dozen charges in a massive corruption scandal involving her longtime friend and private aide, Choi Soon-sil.

Choi is accused of having used her connections with Park to pressure conglomerates to donate a huge amount of funds to her nonprofit foundations and financially help her daughter, a professional horse rider.

Conservative supporters of Park claim she's innocent and a victim of the Moon administration's political oppression.

Moon took note of "divergent positions and points of view" on the matter, calling it a source of difficulty for his governance.

Asked if Moon went into detail on the current political impasse, Ko said he mostly listened to the views of the other participants. They included former Prime Minister Lee Hong-koo, former Environment Minister Yoon Yeo-joon, and a retired Supreme Court justice, Kim Young-ran, as well as nine other experienced and well-respected social leaders.

Four LKP lawmakers had their heads shaved in protest against Moon's reform drive, highlighted in a set of related bills that the ruling Democratic Party recently put on a formal "fast track" in cooperation with three minor opposition parties.