SEOUL, May 3 (Yonhap) -- North Korean propaganda outlets lashed out at the United States over recent exercises involving a THAAD missile defense battery stationed in South Korea, calling them provocations and a menace.

Last month, U.S. Forces Korea (USFK) conducted the weeklong exercises with a Terminal High Altitude Area Defense (THAAD) battery at Camp Humphreys in Pyeongtaek, 70 kilometers south of Seoul, allowing the soldiers "to showcase crew proficiency and readiness," according to a post it made on Facebook.

In an article, Uriminzokkiri, a North Korean propaganda website, said the drills were "military provocations that dampen hard-earned peaceful atmospheres on the peninsula" and "an overt intimidation against North Korea."

Meari, another North Korean propaganda outlet, also claimed that the THAAD exercises constitute a military provocation that is aimed not only at the North but neighboring countries and has sparked fury in the international community.

About 28,500 U.S. troops are currently stationed on the Korean Peninsula to deter North Korean aggression, a legacy of the 1950-53 Korean War, which ended in an armistice, not a peace treaty.

Pyongyang has bristled at USFK's exercises as well as joint drills between Seoul and Washington, calling them rehearsals for invasion, while the allies have argued that their drills are defensive in nature. 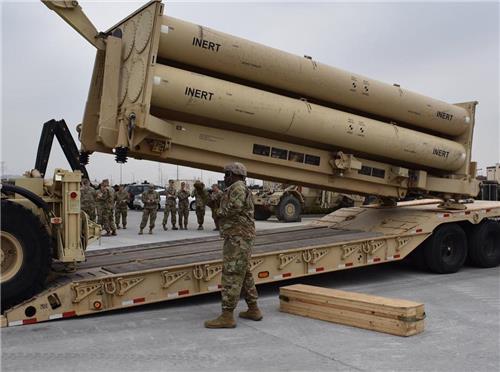