SUWON, South Korea, May 3 (Yonhap) -- Amid an escalating conflict between the prosecution and the police over investigative rights reform, the justice minister called on both sides to approach the issue from the "perspective of the people" Friday.

Justice Minister Park Sang-ki said now is the time to overhaul the prosecution's investigative practices and rights in accordance with the principle of checks and balances.

"Both the prosecution and the police should approach the issue of rearranging investigative rights from the people's standpoint," Park said in an address at a ceremony celebrating the opening of the Suwon High Court and the completion of a new building of the Suwon District Prosecutors' Office in Suwon, just south of Seoul. 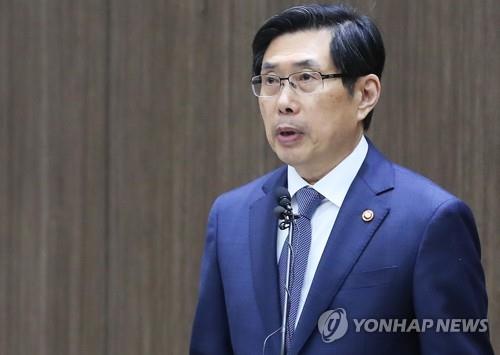 "Now the times and circumstances have been changing and the people's perspective and consciousness have also changed. The prosecution's investigative practices, as well as its investigative rights, should be readjusted according to the principle of checks and balances," Park said.

Noting that prosecutors have a broad judicial control authority over police by monopolizing indictment powers and the rights to request various warrants, the minister said individual problems and concerns related to judicial reforms are expected to be intensively discussed at the National Assembly.

The minister's remarks came after Prosecutor-General Moon Moo-il publicly criticized the recent parliamentary approval of the fast-tracking of reform bills on rearranging investigative rights between the prosecution and the police, and establishing a new investigative agency to deal with corruption by high-ranking government officials.

Under the reform bills, the police would be empowered to initiate and close cases without approval from the prosecution, while the new government official investigative agency will have its own indictment power.

Moon said in a statement Wednesday that the reform bills run counter to the democratic principles of checks and balances.

The National Police Agency issued a statement of rebuttal the following day, arguing that contrary to Moon's claim, the reform bills strengthen the prosecution's control over police investigations in a neutral and objective way.

The justice minister expressed concern about an escalation of conflict between the prosecution and the police in his address.

"The reform issue should be approached from the perspective of the people," the minister said. "Both sides should humbly and earnestly make preparations based on the realities and rational grounds in order not to be criticized for pursuing organizational selfishness."

Meanwhile, Moon plans to cut short a trip to Ecuador and return home Saturday, drawing attention over what message he will deliver on the issue.

Moon will reportedly meet with senior prosecution officials to explore the prosecution's response to the latest controversy.

The ruling Democratic Party has denounced Moon's statement, claiming that it is not proper for the prosecutor-general to openly deny investigative rights reform that has been initiated by the government.