SEOUL, May 3 (Yonhap) -- South Korea's Foreign Minister Kang Kyung-wha on Friday urged both the United States and North Korea to show flexibility to break a logjam in their stalled nuclear negotiations.

During a press conference with the foreign press in Seoul, Kang also stressed the need for a "comprehensive picture" for the North's nuclear disarmament in an apparent appeal for Pyongyang to move beyond its current piecemeal tactics.

"At the end, (when) you sit at the table, flexibility is required on the part of all. For the two sides to meet and have productive discussions, obviously it is going to require flexibility to come to an agreement," she said.

"But my urging at this point is that to really come to an agreement that leads us to complete denuclearization as well as better relations between the U.S. and North Korea, there has to be a comprehensive picture," she added. 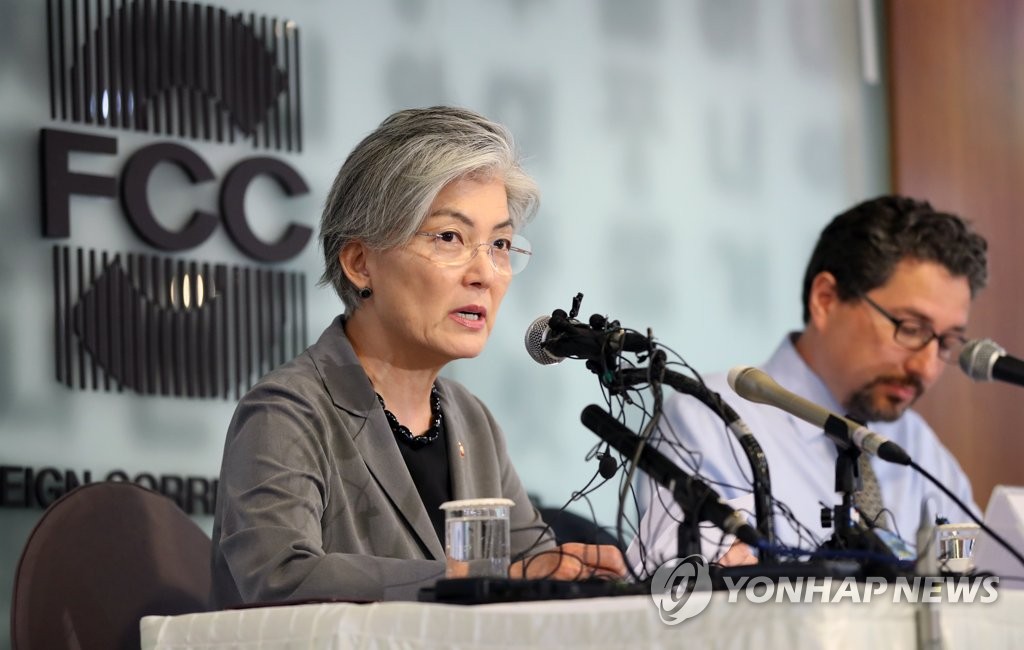 A day earlier, Kang called for Pyongyang to have a "comprehensive perspective" as the U.S. has been pursuing a comprehensive approach under which it wants to strike a broad-based deal that would be implemented in stages.

Pyongyang has favored a step-by-step, incremental approach that critics say appears intended to string out the negotiations and wring out more concessions.

"Our approach is to discuss the broader and whole picture and agree to that whole picture. Inevitably with the complicated program like the North Korean nuclear program, actions will have to be taken step by step but simultaneously as well," she said in the foreign press meeting.

Divergent approaches between Washington and Pyongyang led to the collapse of the second summit between U.S. President Donald Trump and North Korean leader Kim Jong-un in Hanoi in February.

Their negotiations have been stalled since the summit. Seoul has been exploring ways to create fresh momentum for the resumption of their dialogue, which may include sending a special envoy to Pyongyang.

Touching on the North's current status regarding the deadlocked negotiations, Kang said that Pyongyang appears to be still "taking stock and calculating next moves."

"But I think we remain optimistic (that) at some point they will return to dialogue," she said.

On the issue of sanctions relief, Kang underscored the need for Pyongyang to take "visible, concrete and substantial" action toward denuclearization should it want the international community to accede to its demand for sanctions relief.

"We have to see it in the global context. These are global sanctions imposed by the U.N. Security Council ... That requires North Korea's action that assures us that they are well on the way to complete denuclearization."

"The sanctions are there because of North Korea's nuclear and missile program, and therefore there has to be some visible, concrete, substantial action on that track for the global community to do anything about the sanctions," she added.

As for Japan's request for diplomatic talks over the issue of Tokyo's wartime forced labor, the minister said that Seoul is still reviewing the matter.

"We have not yet said no to that request, but our task force involving the foreign ministry and relevant agencies (is) continuing to analyze the matter," she said.

Seoul's Supreme Court has recognized the individual rights of forced labor victims to claim damages. But Japan argues that all reparation-related issues were settled in a 1965 state-to-state treaty that normalized bilateral diplomatic ties.