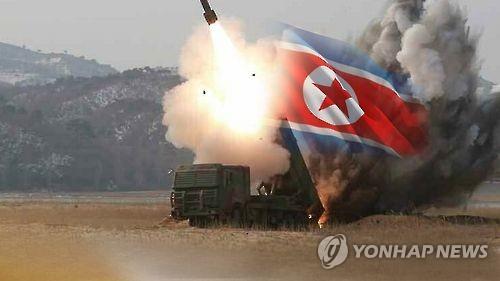 The North has not conducted a ballistic missile test since late November 2017, when it test-fired the Hwasong-15 intercontinental ballistic missile (ICBM). Washington has hailed the lull as one of its major achievements in denuclearization talks with Pyongyang.

North Korea has not reported on Saturday's firings.

According to sources, Seoul's intelligence agency thinks the projectiles were not missiles given their short travel distances and relatively low altitudes.

They, however, did not confirm whether the projectiles were fired from the 300-mm multiple launch system, the sources said, citing a briefing from the National Intelligence Service.

After holding an emergency meeting involving top security officials, the presidential office said the latest launch "runs counter to the inter-Korean military agreement signed in September" and is a source of "grave concern," according to presidential spokesperson Ko Min-jung.

Saturday's firings came ahead of U.S. top nuclear envoy Stephen Biegun's trip to Seoul next week to discuss North Korea issues with his South Korean counterparts, which could include a possible provision of humanitarian assistance to Pyongyang amid concerns for worsening food shortages in the communist state.