As Koo ran out of the batter's box, the ball seemed to be on its way over the wall, 122.5 meters away from the plate. And about halfway to second base, Koo raised his right arm in celebration of what he thought was a home run. 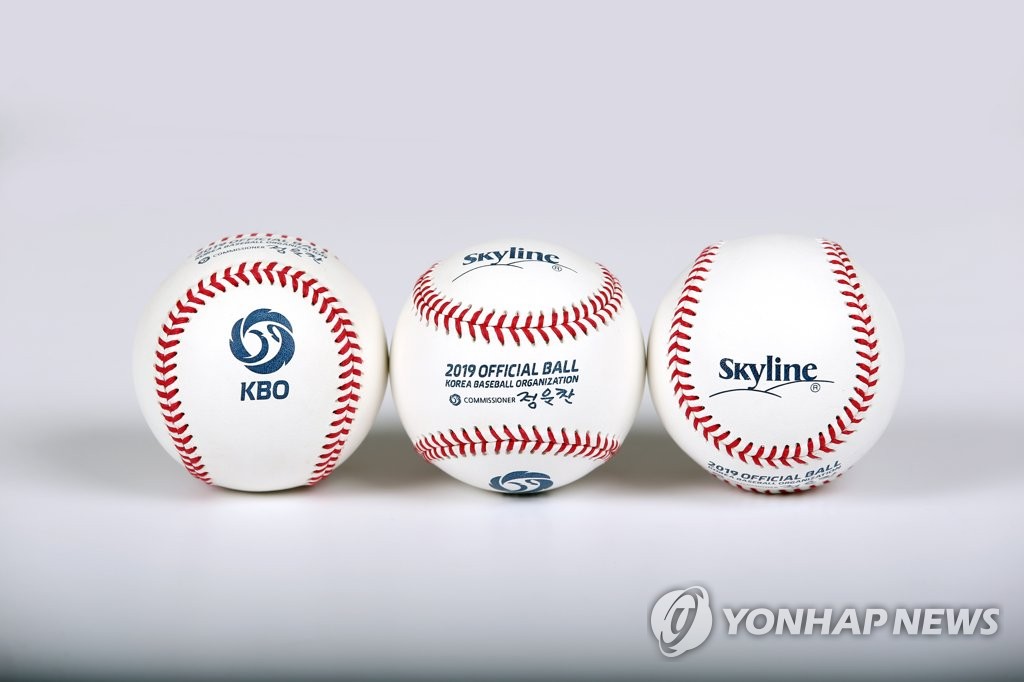 KT's center fielder, Mel Rojas Jr., had other ideas. Unbeknownst to Koo, Rojas made a leaping catch at the wall. Koo, who by now had broken into his home run trot, didn't learn of his fate until after making the turn at third base. Once his third base coach, Choi Tae-won, told him what had happened, Koo hung his head and covered his face with his hands in embarrassment as he trudged back to the dugout.

There are two lessons to be learned from this play. One, never prematurely celebrate a home run, because you're only tempting the Baseball Gods. And two, remember that the KBO's new ball doesn't fly quite as far as the previous ones.

Welcome to the new KBO, Version 2019, where would-be home run balls get caught at the fence or fall short on the warning track.

Since the start of the new season on March 23, offensive numbers have taken a dip across the board compared with the same period a year ago. 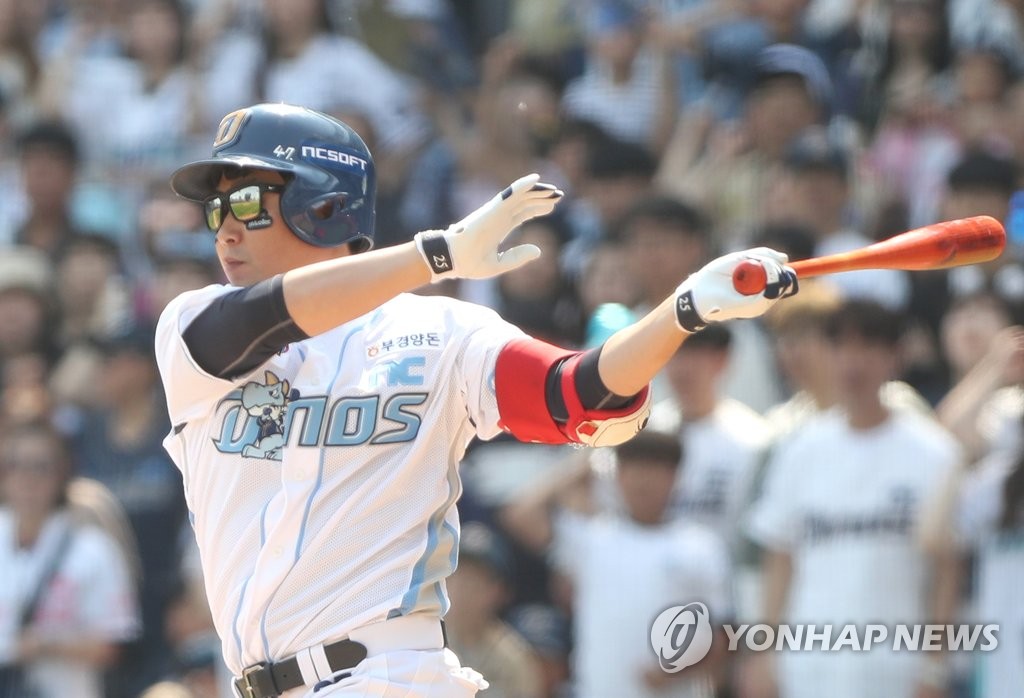 Last year, a record five KBO sluggers surpassed the 40-homer plateau, and the teams combined for 1,756 home runs, surpassing the single-season record by more than 200. On May 5, 2018, seven hitters had reached double figures in home runs, led by 15 from SK Wyvern's Choi Jeong.

This year, Yang Eui-ji of the NC Dinos is the league leader in home runs with eight, followed by six hitters with seven apiece. No one is on pace to reach 40 home runs in 2019.

So why has there been such a precipitous decrease in power numbers? Have these hitters suddenly gone bad?

About a month and a half into the season, the new official ball has been cited by several players and coaches as the main culprit for the drop in offensive production. The new ball is heavier and larger with a smaller coefficient of restitution (COR), or the ratio of the ball's relative speed after collision with the bat to its relative speed before collision. In layman's terms, the lower COR means less bounce off the bat.

For 2019, the KBO lowered its ball's COR numbers to match those in NPB. 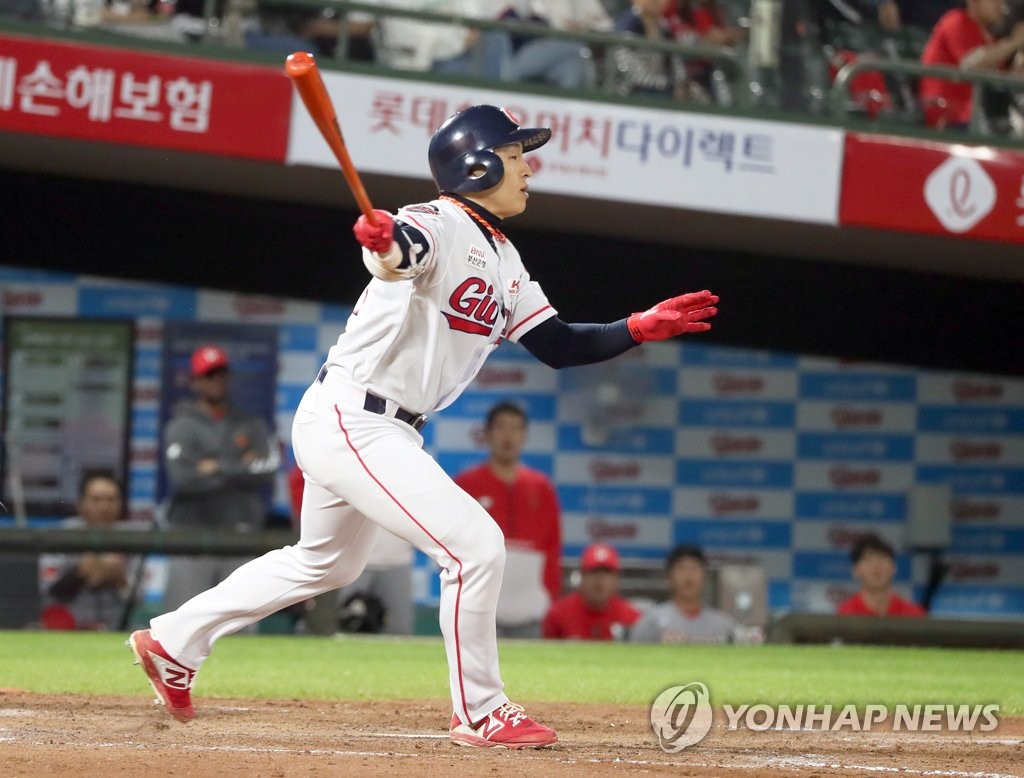 Though they aren't able to offer scientific data to prove the new ball's impact on the downturn in offense, hitters say they can feel the ball doesn't jump off the barrel of the bat the way previous balls did. Managers and coaches claim a lot of balls that they felt would have left the park in the past have died on the warning track this year.

If that's indeed the case, then the KBO's decision to adopt the new ball is having its desired effect.

There were several reasons for the switch. With teams piling up runs, the games were dragging on, and the KBO wanted to speed up games and hold the explosive offense in check.

Also, the league wanted to better prepare its hitters for international competitions, where balls have similar COR figures to those used in MLB and NPB. Sluggers who routinely belted out 30 or more home runs in the KBO have struggled to go deep in recent international events where balls were less lively off the bat. South Korea, once the darling of international baseball with its deep runs at the two first editions of the World Baseball Classic (WBC) in 2006 and 2009, hasn't made it out of the preliminary round in the past two editions, in 2013 and 2017, The WBC is operated by MLB, and the tournament's ball is made to the exact specifications of the one in the big leagues. So why not make these hitters face a similar type of ball over a 144-game season in the domestic league?

Whether this will pay off in the long run internationally remains to be seen. For now, players and the coaches alike are still trying to come to grips with this change. 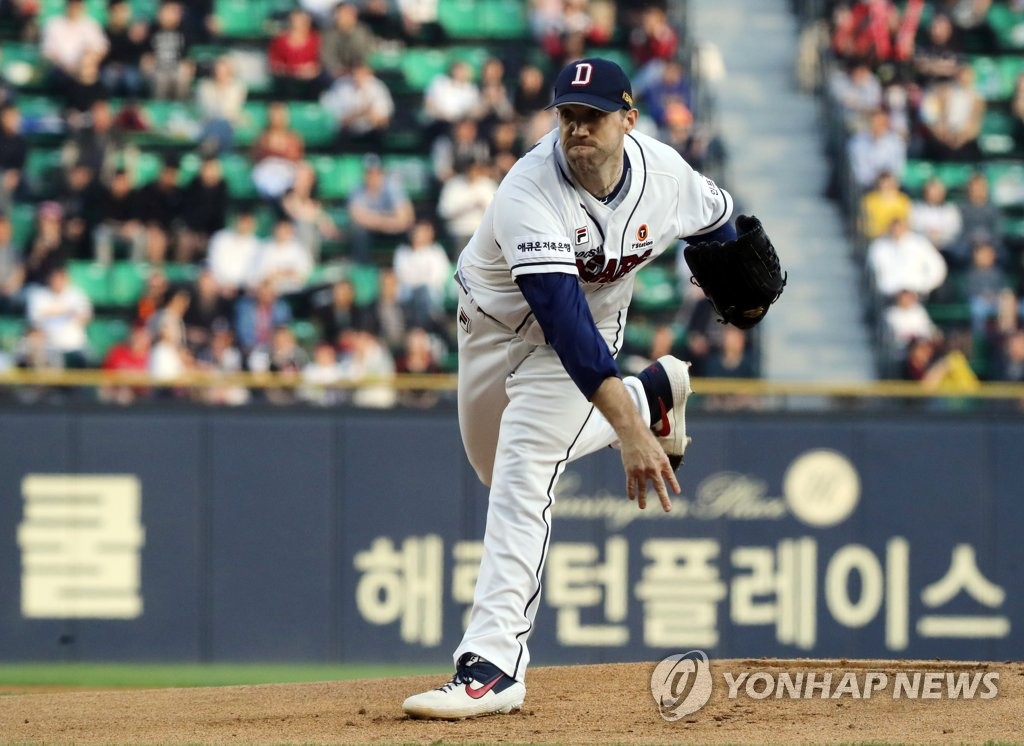 "Obviously, Rojas made a great catch but I think a ball hit that hard last year would have cleared the fence easily," Lions' manager Kim Han-soo told reporters about Koo's loud flyout. "I think balls are clearly not traveling as far as before."

Jang Jung-suk, skipper for the Kiwoom Heroes, said he has heard his players say that the ball doesn't go nearly as far. He said the switch will separate the cream of the slugging crop from the rest of the bunch.

"The true power hitters will still keep driving balls over the fence, and I think other players will struggle more," Jang told reporters. "But all 10 teams are playing with the same ball, so we'll just have to keep playing the game the same way."

Son, a three-time hit king who's second among all active players with a lifetime .324 batting average, knows a thing or two about making contact with the ball. And he has noticed some difference in the sound.

"Until last year, you heard the loud thwack at contact, but the sound is somewhat duller this year," Son said.

Son also said the less jump off the bat has also affected outfield defense, with outfielders now having to try to make a catch at the wall or the warning track on balls that would have left the park in the past. And in an April game, Wyverns' center fielder Kim Kang-min, still considered a strong defender at age 36, misjudged the flight of a ball so badly that he let it drop in front of him for a double.

But there are those who refuse to blame the decrease in offensive production on the new ball. They instead point to the unusually early start to the regular season, which left hitters with less time to prepare and exposed them to colder weather conditions earlier in the season. 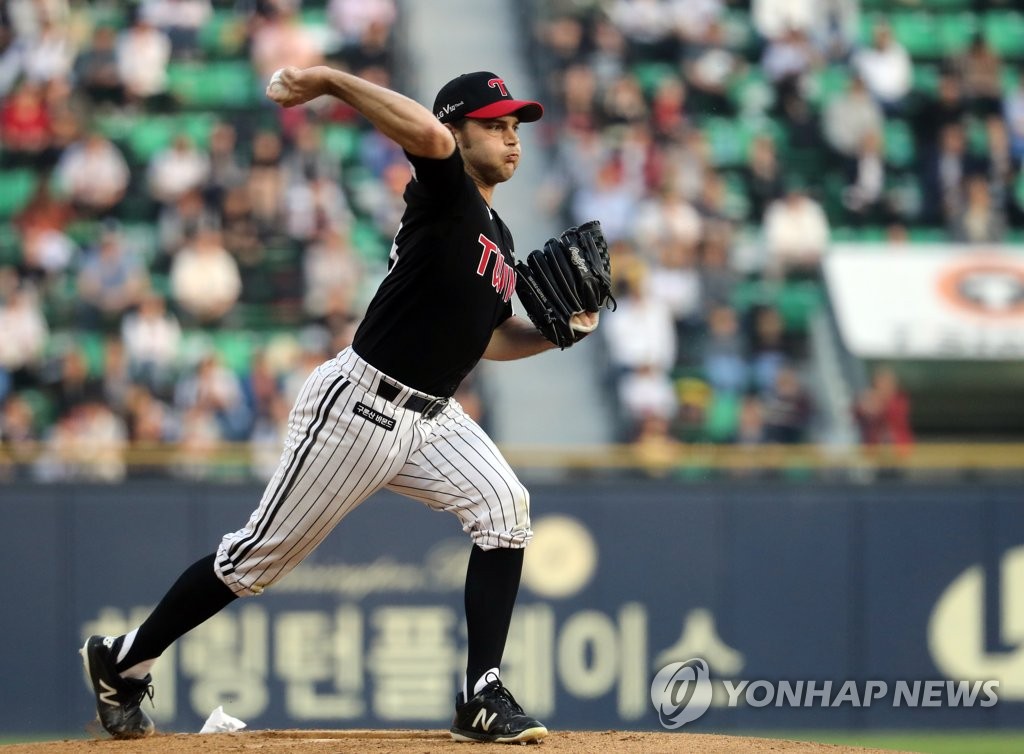 There were only eight preseason games, tied for the fewest ever, and the regular season began on March 23, the earliest Opening Day in the KBO's 38-year history. With South Korea scheduled to host the preliminary round of the Premier 12, an Olympic qualifying tournament, in November, the KBO wanted to ensure the playoffs would end by the late October, at the latest.

And the weather remained unseasonably cold across the nation through the early part of April.

"I think it's been due to cold weather, not the COR of the new ball," said Chae Eun-seong of the LG Twins, who set a career high with 25 home runs in 2018 but is stuck at two this season. "Hitters have had a hard time getting into a groove because it was too cold early in the season."

"As the season goes on, pitchers will tire, and hitters will find their rhythm," he said. "I think the bats will eventually come alive."

We may already be seeing that wave. Over the first eight days of the season, covering 40 games in total, the teams scored 386 runs and slugged at a .386 clip. In the most recent eight-day, 40-game stretch from April 27 to May 5, 409 runs crossed the plate and the teams had a .407 slugging percentage.

Lost in the hoopla surrounding the new ball is how well pitchers have performed this season. You can change the ball all you want, but pitchers will still have to execute their pitches. 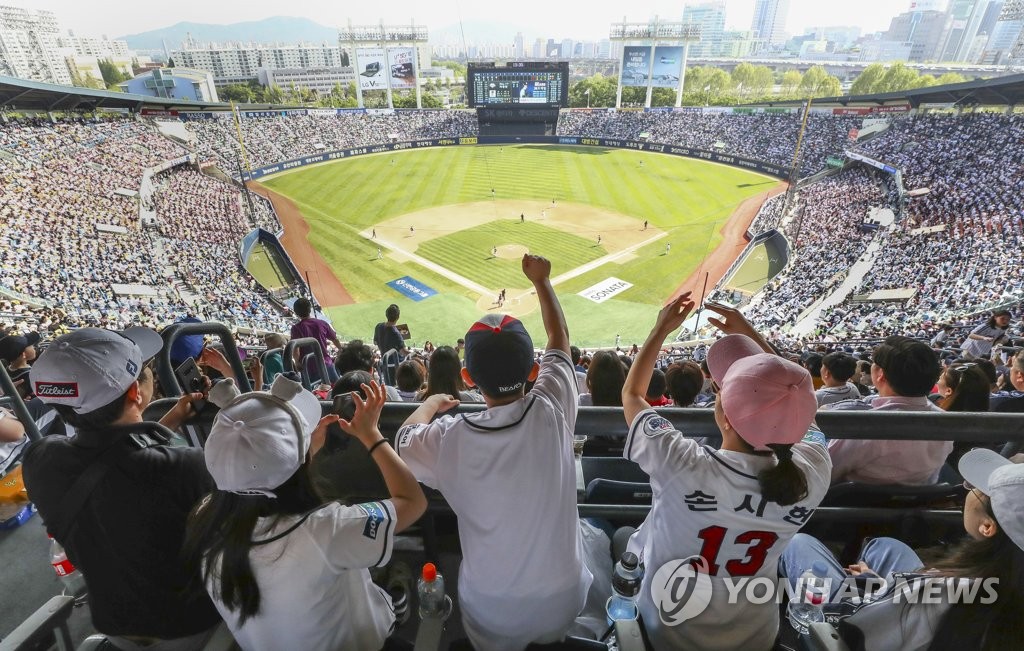 Four starters had an ERA under 2.00 through May 5. At this time last year, two hurlers were in the sub-2.00 ERA club but only one, Josh Lindblom of the Doosan Bears, finished the season with an ERA below 3.00, at 2.88.

This year, Lindblom is leading the way again at 1.54. He has overtaken Tyler Wilson of the LG Twins, who saw his ERA balloon from 0.57 to 1.57 in one bad outing last weekend.

At least for Wilson, the ball doesn't appear to have had much of an impact either way. Wilson said he was "indifferent" to the changes in the ball and added the difference from the previous ball "is ever so subtle."

Pitchers as a whole are throwing more sliders and sinkers this year than last, which have led to weak contact. The usage rate for the slider is up from 20.8 percent to 22.1 percent, and for the sinker, it's gone up from 7 percent to 12.7 percent.

Count Brooks Raley, who has shaken off a rough start to his fifth season for the Giants, among pitchers happy to see the switch to the new ball. He has trimmed his ERA from 6.52 at the end of March to 3.54 through last weekend.

"If it can turn down the offense a little bit, I am all for it," the American left-hander said.