SEOUL, May 7 (Yonhap) -- The defense ministry called on North Korea on Tuesday to stop escalating military tensions on the Korean peninsula, expressing concern over Pyongyang's firing of multiple projectiles into the East Sea over the weekend.

On Saturday, North Korea fired "several short-range projectiles" involving a new type of tactical guided weapons and 240-mm and 300-mm multiple rocket launcher systems off the East Coast from Hodo peninsula near its eastern coastal town of Wonsan between 9:06 a.m. and 10:55 a.m., according to Seoul's Joint Chiefs of Staff (JCS).

They were spotted flying 70 to 240 kilometers, with their altitude ranging from 20 to 60 km, the JCS added.

"We are deeply concerned about North Korea's launch of multiple projectiles, which violates the spirit of the inter-Korean military agreement," ministry spokesperson Choi Hyun-soo said when asked if Seoul regards the firings as provocations.

"We urge North Korea to halt acts that escalate military tensions on the Korean Peninsula," she added.

In September last year, the two Koreas signed the Comprehensive Military Agreement on the sidelines of the third summit between President Moon Jae-in and North Korean leader Kim Jong-un in Pyongyang, under which the two sides vowed a series of trust-building and arms-control measures under a broader scheme to halt all hostile acts against each other.

While noting that the South Korean and the U.S. intelligence authorities are analyzing exactly what North Korea fired, the South Korean military has said it is not known if the tactical weapons are ballistic missiles or not.

Experts have said, based on analysis of photographs released by the North's Korean Central News agency, they are believd to be short-range, ground-to-ground ballistic missiles, which are known as the North Korean version of Russia's Iskander.

The solid-fuel missiles can fly as far as 300 km, which puts a large part of the Korean Peninsula within their range, and they are capable of neutralizing THAAD, an advanced U.S. anti-missile defense system, and are nearly impossible to eliminate before launch due to their mobility, experts noted.

If confirmed as ballistic missiles, the latest launch could be a source of controversy, as the U.N. Security Council resolution bans the communist nation from all kinds of ballistic missile launches.

On Saturday, the JCS initially announced that North Korea fired "short-range missiles" but later relabeled them as only "projectiles." 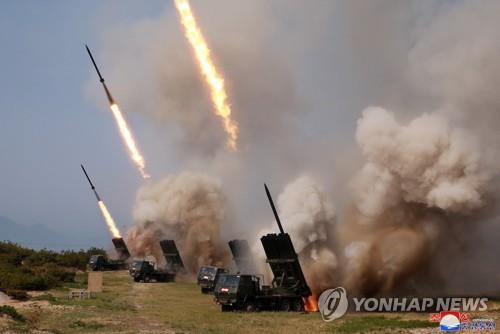