In the phone conversation slated for Tuesday night (Seoul time), the leaders plan to "exchange opinions on the Korean Peninsula security conditions" following their White House summit on April 11 and discuss ways to move the denuclearization process forward, according to Cheong Wa Dae spokesperson Ko Min-jung. 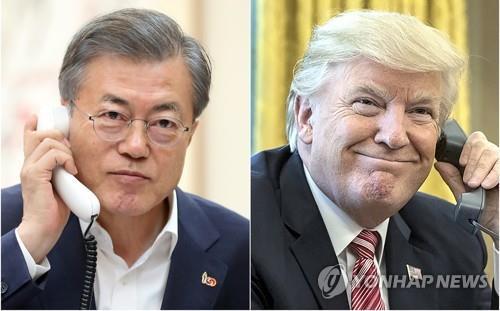 Moon and Trump are also expected to talk especially about North Korea's latest launch of projectiles.

Those flew as far as 240 kilometers at a height of up to 60 km, it said, calling the firing a breach of the spirit of inter-Korean military accords signed last year.

At issue is whether the North test-fired a ballistic missile in violation of the U.N. Security Council resolutions, which the international community would characterize as an explicit provocation.

Among other agenda items is Trump's possible visit to South Korea in May or June. He's scheduled to travel to Japan twice in those months.

On the exact time of the phone talks, the 21st between Moon and Trump, Ko said the two sides are still in consultations about it.

They usually talk for about 30 minutes starting at around 10 p.m. (Seoul time).

Meanwhile, it remains unconfirmed whether Moon will meet with Stephen Biegun, the U.S. special representative for North Korea, who is to visit here on Thursday and Friday.

The issue of Biegun's meeting with Cheong Wa Dae officials has not been decided yet, Ko said.