SEOUL, May 8 (Yonhap) -- An Asiatic black bear, classified worldwide as a first-grade endangered animal, has been spotted inside the Demilitarized Zone (DMZ) that separates the two Koreas, government agencies said Wednesday.

The Ministry of Environment and the National Institute of Ecology (NIE) said one Asiatic black bear was photographed last October by unmanned ecological research equipment installed in the eastern section of the DMZ.

The unpopulated zone is also known as an ecological treasury of hundreds of rare plants and animals, including many endangered species. 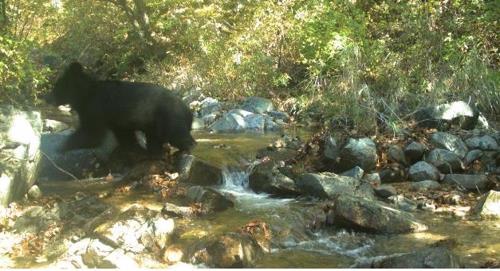 According to ministry officials, the photo of the Asiatic black bear was taken in October last year by one of 92 camera-like devices installed by the NIE in the DMZ in 2014.

The photo was sent to the NIE in March after a security check by the military.

The ministry officials speculate that the possibility of the black bear emigrating from the outside is low considering the barbed-wire fences installed along the southern and northern boundary lines.

"It is believed that the photographed bear, about eight to nine months old and weighing about 25 to 35 kilograms, is a descendant of the Asiatic black bears who had inhabited the DMZ region for quite a long time," said the ministry.

The NIE speculates that at least three Asiatic black bears, including the baby bear's parents, are now residing in the DMZ.

"The excellent ecological value of the DMZ has been proven again. The government will map out comprehensive measures for the systemic preservation and management of the DMZ's ecology," said Yoo Seung-gwang, an official at the environment ministry.