SEOUL, May 9 (Yonhap) -- South Korea's central bank said Thursday it will maintain its accommodative monetary policy, while closely watching movements of the economy and consumer prices.

"The inflationary pressures on the demand side will not be high for the time being, while the domestic economy will sustain a rate of growth that does not diverge greatly from its potential level," the Bank of Korea (BOK) said in a monetary policy report.

The central bank said it will "maintain its accommodative monetary policy stance."

In an April policy rate-setting meeting, the BOK unanimously decided to hold the policy rate steady at 1.75 percent. It has been unmoved since the panel raised the rate by a quarter percentage point in November last year.

However, the BOK slashed this year's growth forecast to 2.5 percent, raising market speculation that it could cut its key rate this year as exports have cooled and inflationary pressures have remained weak.

Consumer prices have been far below the target inflation of 2 percent set by the BOK for years. In April, consumer prices moved up 0.6 percent from a year earlier, marking the weakest growth since April 2015.

In the report, the BOK said it will operate its monetary policy by carefully monitoring uncertainties related to global trade disputes, Britain's exit from the European Union and the U.S. Federal Reserve's monetary normalization.

The BOK also noted that it will "continue to operate its monetary policy with attention devoted to financial stability as well."

Although the growth pace of household debt has slowed, it keeps growing faster than disposable income, which expanded 3.9 percent last year.

The BOK said there is a possibility that the pace of household debt growth will quicken. 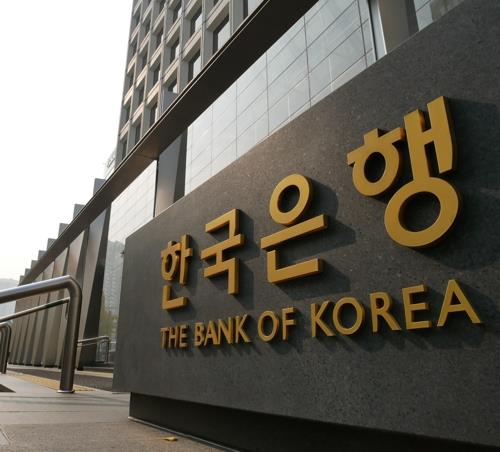