SEOUL, May 9 (Yonhap) -- Acting U.S. Defense Secretary Patrick Shanahan was not believed to be referring to the results of official analysis when he described the projectiles North Korea fired over the weekend as "rockets and missiles," Seoul's defense ministry said Thursday.

Shanahan made the remark during a congressional hearing on Wednesday as he talked about the situation he was in when North Korea fired a barrage of short-range projectiles into the East Sea on Saturday morning (Korean time).

"I went for a run and then Chairman Dunford called me up and said North Korea was now shooting rockets and missiles," Shanahan told the hearing, referring to U.S. Joint Chiefs of Staff Chairman Gen. Joseph Dunford.

The remark came as South Korea has yet to determine whether the North's projectiles included ballistic missiles amid opposition allegations that the Seoul government is reluctant to acknowledge the involvement of missiles over concerns it could negatively affect the negotiating process with Pyongyang.

"As far as I know, (what Shanahan said) was not official comments on the results of (ongoing) analysis," Col. Roh Jae-cheon, a deputy ministry spokesman, told a regular press briefing.

Noting that South Korean and U.S. intelligence officials have been working together to analyze related matters precisely, the official said it would take "quite a long time" before final results are available.

The South Korean military has said the firings involved a new type of tactical guided weapon and 240-mm and 300-mm multiple rocket launcher systems, and it cannot determine if they test-fired ballistic missiles as of now, though some experts said they are believed to be short-range, ground-to-ground ballistic missiles. 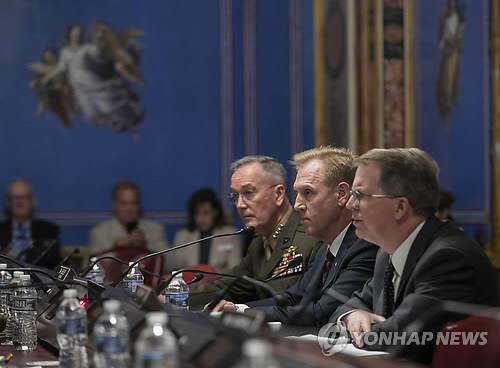