The projectiles were fired from the northwestern area of Kusong in an easterly direction, one of them at 4:29 p.m. and the other at 4:39 p.m., and flew about 420 kilometers and 270 km, respectively, with their altitude reaching around 50 km, the Joint Chiefs of Staff (JCS) said, adding they splashed into the East Sea.

The JCS did not elaborate further and did not specify exactly what types the missiles were, only saying that the South Korean and U.S. intelligence authorities are analyzing details of the projectiles.

From the Kusong area, North Korea last fired a new mid-to-long-range ballistic missile, the Hwasong-12, in May 2017. One week later, it launched the ground-to-ground Pukguksong-2 missile, also known as a KN-15. 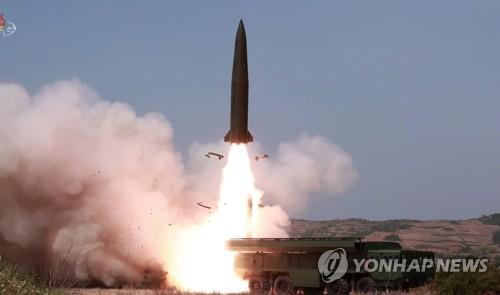 Experts said what Pyongyang launched Thursday could have either been a Scud-type ballistic missile or a new type of ground-to-ground Iskander missile identical to that test-fired last week.

On Saturday, the North launched a volley of projectiles, including what it claimed were newly developed "tactical guided weapons" off the east coast, in an apparent show of frustration over the stalled nuclear talks with the United States.

If confirmed as missile launches, it would mark the first such firing since November 2017, when the North test-fired the Hwasong-15 intercontinental ballistic missile (ICBM). Such launches constitute a violation of U.N. Security Council resolutions that ban North Korea from all kinds of ballistic missile fire.

President Moon Jae-in said in a TV interview that the North's missile launches, even if they are short-range ones, could be a violation of U.N. Security Council resolutions if they are ballistic missiles. He also said Pyongyang appears to be discontent with February's no-deal summit with the U.S.

"On the other hand, I think they have a characteristic calling for early talks. Whatever the North's intentions are, I think that after all, a fundamental solution should be for the North and the U.S. to sit down (for negotiations as early as possible)," he said.

Moon urged the North to refrain from further launches.

"Wherever the North's intentions lie, we would like to caution that such acts by the North could make the negotiation and dialogue phase harder," he said.

Despite the missile fire, Moon also said he wants to continue the process of providing food aid to the North as long as there is a national consensus on it because such assistance is necessary from a humanitarian perspective and it could also help resolve the deadlock in the nuclear negotiations.

Moon offered to hold talks with the ruling and opposition parties to discuss the issue.

After Saturday's launches, South Korea and the U.S. gave measured responses in an effort to keep the negotiating process with Pyongyang alive. In a phone conversation with U.S. President Donald Trump earlier this week, Moon also expressed his desire to provide food aid to the North, and Trump voiced support for it.

The latest launches could undercut what Trump has touted as his greatest accomplishment: the end of weapons tests. Since November 2017, Kim Jong-un has declared a moratorium on nuclear and ICBM tests, though launching short-range missiles does not renege on its self-declared moratorium.

Thursday's launches also coincided with a visit to Seoul by the U.S. special representative for North Korea, Stephen Biegun, and annual trilateral defense talks between South Korea, the U.S. and Japan. 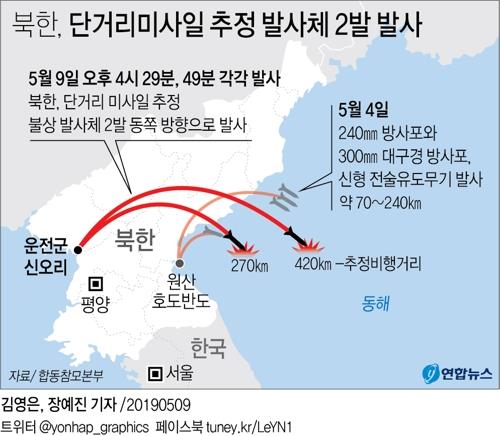