VENICE, May 10 (Yonhap) -- South Korean artist Lee Bul has returned to the Venice Biennale this year with a new artwork that symbolizes the tragic situation of the Korean Peninsula.

"Aubade V" was unveiled at the main exhibition venue of the Arsenale at the 2019 Venice Biennale titled "May You Live in Interesting Times" on Thursday (local time). The art biennial officially kicks off on Saturday and runs through November.

The installation is four meters high and includes wire fencing from an old guard post from the Demilitarized Zone (DMZ) that lies between North and South Korea. The DMZ guard posts were taken down following a military agreement between the two Koreas last year.

It is the fifth of her "Aubade" series, a song of lovers separating at dawn, and seems to bid farewell to the divided peninsula.

But the 55-year-old artist said she wants to surpass the past, which was dominated by clashes of political ideologies. The division of the Korean Peninsula is a consequence of its tragic past.

"The work doesn't say goodbye to the division, but symbolizes the movement of going beyond the ideologies," said Lee, who has long challenged society's conventions and stereotypes.

She is also displaying two other works, including a sculpture titled "Scale of Tongue," in Venice.

It is the second time that Lee has participated in the main exhibition at the Biennale. In 1999, she was awarded an honorable mention for her contribution to both the Korean Pavilion and the international exhibition. 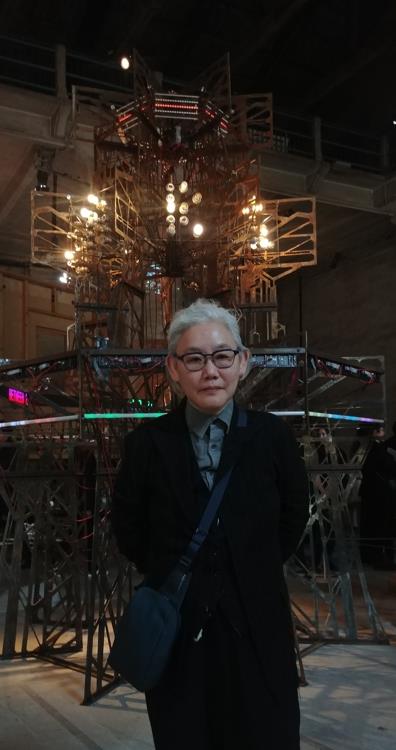