SEOUL, May 12 (Yonhap) -- South Korea's military has not yet determined the details of the short-range missiles that North Korea fired last week, including whether they were ballistic missiles, an official said Sunday.

After the North fired the projectiles on Thursday, the South's military said they were believed to be short-range missiles. But it stopped short of determining whether they were ballistic missiles that the North is banned from launching under U.N. Security Council resolutions.

Even though a spokesperson for the U.S. Defense Department, Lt. Col. Dave Eastburn, said in a statement that the projectiles were ballistic missiles, the South's military dismissed the assessment, saying it is "not an official assessment" of the U.S. government.

On Sunday, a military official said the allies are working together to analyze the missiles.

"The South and the U.S. are conducting joint assessment and joint analysis," the official said. "We're not at a stage yet where we can say when the results will be coming."

Based on photographs of the missiles released by the North's media and analysis of their altitude and flight range, experts have said North Korea appeared to have test-fired its version of Russia's Iskander ballistic missile.

Thursday's firings marked the second time the North has launched projectiles in less than a week. Five days earlier, the North launched a barrage of projectiles into the East Sea. These launches were seen as an expression of Pyongyang's frustration over the stalled nuclear talks with the U.S. 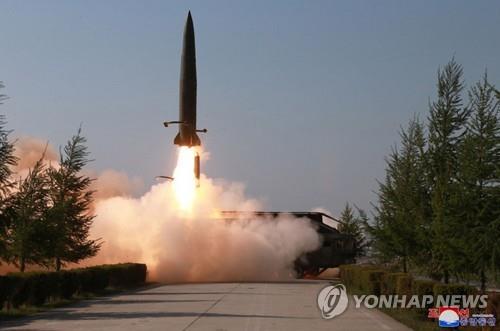 S. Korea not yet able to determine details of N.K. missiles

S. Korea not yet able to determine details of N.K. missiles

Highways clog with traffic as Chuseok exodus is in full swing