SEOUL, May 13 (Yonhap) -- South Korea will continue to strengthen its missile defense capabilities to better counter all kinds of threats, including North Korea's short-range missiles, the defense ministry said Monday.

The pledge came in response to growing concerns over the country's missile defense capabilities after North Korea fired two short-range missiles last week, just five days after the launch of a barrage of projectiles into the East Sea.

Experts have said that in last week's launches, Pyongyang appeared to have test-fired its version of Russia's Iskander ballistic missile, a ground-to-ground missile that is believed to put the entire Korean Peninsula within its range.

"Our military has been developing our own missile defense capabilities with a focus on the Patriot system in order to counter threats posed by North Korea's short-range missiles," defense ministry spokesperson Choi Hyun-soo told a regular briefing. The Patriot system defends against ballistic missiles.

"We will continue to beef up such capabilities aimed at effectively fending off threats from all directions," she added.

As a bedrock scheme to counter Pyongyang's nuclear and missile threats, South Korea has developed and operated a "system to respond to nuclear and other weapons of mass destruction."

The system, which was formally known as the "three-axis" defense system, consists of Korea Massive Punishment and Retaliation (KMPR), an operational plan to incapacitate the North Korean leadership in a major conflict; the Kill Chain pre-emptive strike platform; and the Korea Air and Missile Defense system (KAMD). 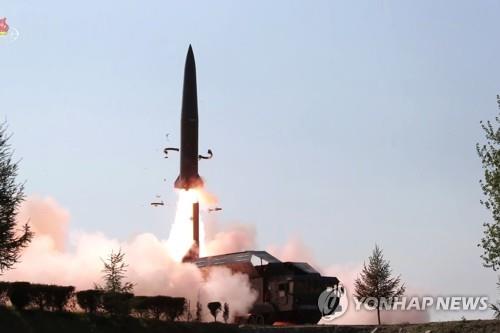 Asked about the military analysis of exactly what North Korea fired during the two rounds of firings this month, the ministry again said it has not yet determined the details, including whether the short-range missiles the North fired last week were ballistic missiles or not.

"The South Korean and U.S. intelligence authorities are analyzing details of the North's projectiles, and no details are available at this stage," Choi said.

After the North fired the projectiles on Thursday, the South's military said they were believed to be short-range missiles. But it stopped short of determining whether they were ballistic missiles that the North is banned from launching under U.N. Security Council resolutions.

As for their May 4 launch, the Joint Chiefs of Staff said Pyongyang was presumed to have tested "a new type of tactical guided weapons" as well as multiple launch rocket systems.