SEOUL, May 14 (Yonhap) -- Last-minute negotiations were under way on Tuesday between unionized bus drivers nationwide and their employers over wage hikes on the eve of a planned strike that would halt the operation of nearly half of the nation's buses.

The Moon Jae-in government and the ruling Democratic Party have announced plans to increase indirect financial incentives for loss-making bus companies, but unionized bus drivers in Seoul and most other regions have not reacted positively.

Trade unions representing over 41,000 bus drivers operating about half of 40,000 buses across the country have threatened to go on strike Wednesday, demanding pay hikes and manpower increases in time for the mandatory 52-hour workweek set to be enforced on bus companies with more than 300 employees from July. 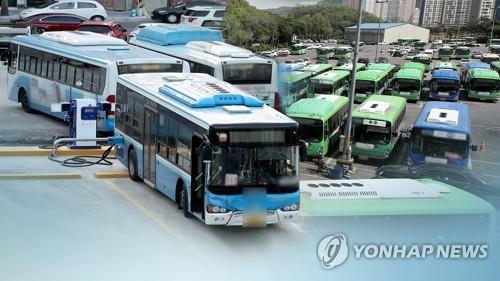 Bus drivers, who argue the planned reduction of their workweek from the current 68 hours to 52 will slash their overtime pay by over 1 million won (US$850) every month, voted overwhelmingly in favor of a walkout last week. As required by the labor law, the unionized bus drivers have since held further negotiations with their employers under the arbitration of the labor relations commissions.

Bus drivers in Daegu, a metropolitan city in southeast South Korea, called off their strike plans on Monday after agreeing to a 4 percent pay increase and two-year extension of the retirement age in talks with their 22 companies. About 3,100 Daegu drivers responsible for operating 1,300 buses had planned to walk out.

In Incheon, west of Seoul, labor and management have also reached an agreement to raise wages for drivers by over 20 percent over the next three years, in addition to a two-year extension of their retirement age, averting a strike.

The Incheon Metropolitan Government plans to increase its annual subsidy by 17 billion won to 127.1 billion won this year to help the city's bus companies cover losses incurred by wage increases.

Bus drivers in the southwestern metropolitan city of Gwangju also decided to cancel their collective action on Tuesday, after labor and management there agreed upon a 4 percent pay raise and other welfare incentives.

The unionized workers in South Chungcheong Province also canceled their planned strike, though they were still negotiating with management on wage hikes and other labor conditions, according to officials.

But labor and management at bus companies in Seoul, Busan, Gyeonggi Province and other metropolitan cities and provinces have failed to narrow their differences, although the Moon government has intervened and offered a package of indirect financial incentives.

Bus drivers have asked for financial support directly from taxpayer money to make up for their income losses, whereas the government prefers indirect support and bus fare increases.

The embattled bus companies have asked local and central governments for fare increases and direct financial support, saying they cannot afford the rise in labor costs under the 52-hour workweek system.

Lee Hae-chan, chairman of the ruling Democratic Party, vowed to expand the semi-public bus management system, in which bus companies are in charge of bus operations and municipal governments cover up their losses.

If their last-minute negotiations fail to result in an agreement by midnight Tuesday, bus operations by companies with more than 300 employees subject to the 52-hour workweek will come to a halt in Seoul and many other populous regions beginning Wednesday.

As the possibility of nationwide public transport chaos looms larger, the government and the ruling party said they will mobilize all possible means, including increased operation of subways and taxis, hiring of chartered buses and adjustment of school hours, to help minimize public inconveniences.

The Moon Jae-in government last year introduced the 52-hour workweek rule as part of efforts to stimulate consumption and generate more economic growth. The shorter workweek went into effect in July 2018 for companies with more than 300 employees, but the bus industry was given a one-year grace period.