SEOUL, May 15 (Yonhap) -- A taxi driver burned himself to death Wednesday in an apparent protest of the introduction of carpooling services by the country's taxi-hailing app operators.

The 76-year-old man, identified only by his surname, Ahn, set fire on himself at around 3:19 a.m. near Seoul Plaza in central Seoul, according to police.

He was immediately taken to a hospital where he died.

Ahn is believed to have burned himself in protest of the adoption of carpooling services, given that he reportedly put signs expressing opposition to shared mobility on his taxi.

An official at a taxi association said Ahn had participated in rallies with his peers against the riding-sharing services.

Two taxi drivers burned themselves to death in December 2018 and January in protest against the services. Another driver set fire on himself in February but survived.

Taxi associations have been strongly opposed to the introduction of carpooling services by the taxi-hailing app operators, such as Kakao Mobility, claiming it will put their business in jeopardy.

Taxi drivers claim carpooling services will eventually take away their passengers and that the services could be used around the clock, as flexible working hours have blurred the traditional notion of commuting hours.

On Wednesday, taxi drivers held a rally at Gwanghwamun Square in central Seoul to call for the ouster of a new ride-hailing service Tada. Organizers estimated the number of participants as roughly 10,000, while police put the number at around 3,000.

"We will make all-out efforts to fight to the end, betting the fate of about 250,000 taxi drivers on (the campaign to deter shared mobility)," the group said. 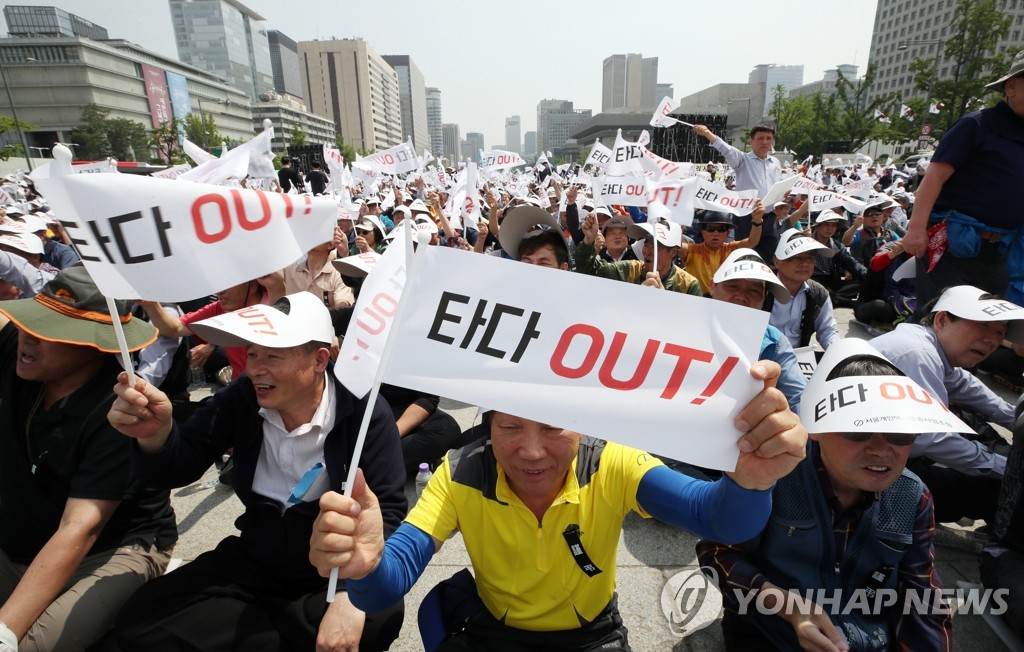