Shanahan, whom U.S. President Donald Trump intends to nominate as his defense secretary, is considering visiting Seoul on June 2-3 after attending an Asian defense forum slated for end-May in Singapore, Kyodo reported, citing sources familiar with the plan.

During the planned trip to Seoul, Shanahan and South Korean Defense Minister Jeong Kyeong-doo "are expected to discuss bilateral defense cooperation, including how to run joint military exercises going forward, as the Trump administration continues denuclearization negotiations with North Korea," the report said.

A South Korean official well-versed in the issue said that Seoul and Washington "are at the final stage of arranging his two-day visit here."

The planned visit apparently aims "to strengthen trilateral security cooperation at a time when Tokyo and Seoul are finding it difficult to mend ties soured over historical disputes and recent incidents," Kyodo said.

The three defense ministers are widely expected to meet at the Singapore gathering, known as the Shangri-La Dialogue.

"In Singapore, the defense chiefs of South Korea, the U.S. and Japan are likely to hold a trilateral meeting. Then Shanahan would have bilateral talks with Jeong and Iwaya in their respective countries," the Seoul official added.

Shanahan has been acting defense secretary since January after James Mattis stepped down in December over policy differences with Trump. 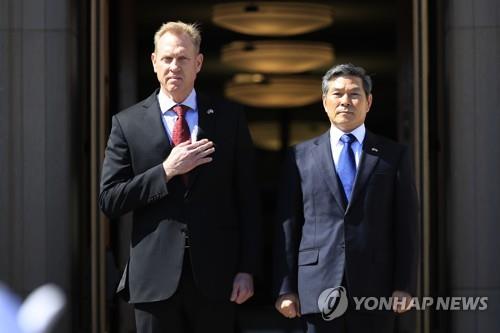