SEOUL/WASHINGTON, May 16 (Yonhap) -- U.S. President Donald Trump will visit South Korea next month for talks with President Moon Jae-in on the denuclearization of North Korea and alliance issues, Moon's office announced Thursday amid growing concerns about the overall peace process.

Trump plans to visit South Korea in late June as part of his regional trip. He will travel to Osaka, Japan, for the two-day G-20 summit to open on June 28.

The exact schedule for Trump's second trip to South Korea as U.S. president remains unannounced. He made a state visit to South Korea in November 2017.

"The two leaders plan to discuss ways for the establishment of a permanent peace regime through the complete denuclearization of the Korean Peninsula and the strengthening of the South Korea-U.S. alliance," Cheong Wa Dae spokesperson, Ko Min-jung, said early Thursday morning (Seoul time). 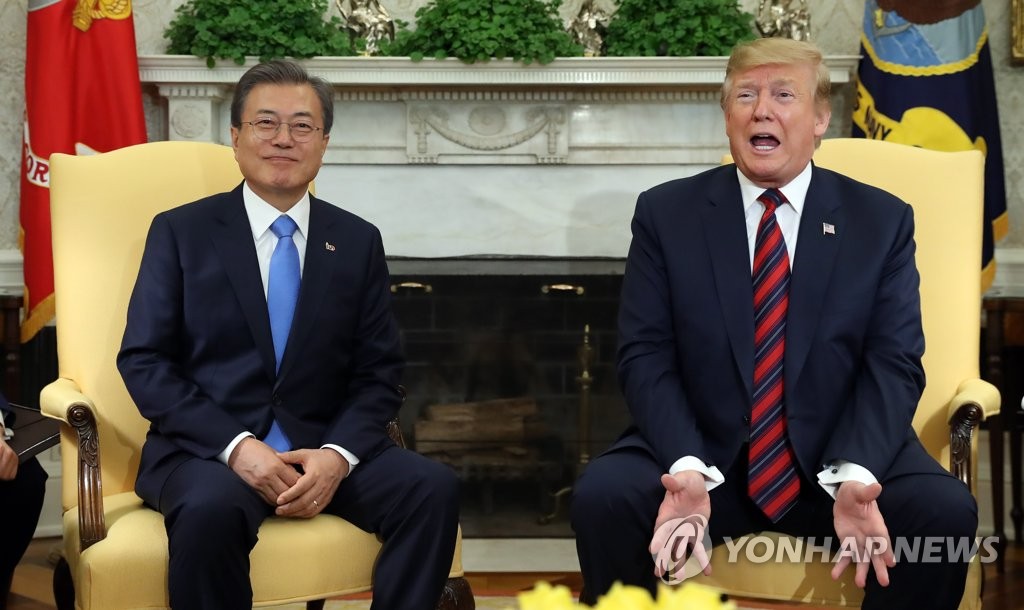 She added Seoul and Washington have agreed to have additional diplomatic consultations on the detailed schedule of Trump's upcoming visit to the peninsula.

"(We) have no information to provide with regard to such issues as format and schedule," a Cheong Wa Dae official told reporters. "We will have to see what agenda items will be discussed."

Making public Trump's South Korea visit plan, the White House said, the leaders will "continue their close coordination on efforts to achieve the final, fully verified denuclearization" of North Korea and talk about bolstering the alliance.

Asked about the difference between Moon's office and the White House in wording on the denuclearization goal, the Cheong Wa Dae official said it's just a matter of translation.

It's a practice to choose words in coordination between the two nations within an agreed-upon context, the official stressed.

Moon and Trump had a White House summit in April. At that time, Moon invited Trump to visit South Korea.

Doubts have grown about the future of denuclearization talks since Trump's summit with North Korean leader Kim Jong-un in Hanoi in late February ended without any formal accord.

Pyongyang recently launched two apparent short-range missiles and fired a salvo of projectiles, a move seen as a protest against the U.S. attitude and an attempt to put pressure on the Moon administration. The secretive nation argued that the firing was part of routine, sovereign defense drills.

On Tuesday, North Korea's foreign ministry strongly denounced the U.S. seizure of one of its cargo ships, known as the Wise Honest. It's accused of shipping coal in violation of U.S. sanctions.

"The latest U.S. act constitutes an extension of the American method of calculation for bringing the DPRK to its knees by means of 'maximum pressure' and an outright denial of the underlying spirit of the June 12 DPRK-U.S. Joint Statement." DPRK is the acronym for the country's official name, the Democratic People's Republic of Korea.

Pyongyang's hard-line stance came as the liberal Moon government is seeking to provide food aid for the neighbor, in which many residents are reportedly suffering famine.

Trump has supported Seoul's plan, according to Cheong Wa Dae, while the president has responded to Pyongyang's recent military activities in a relatively calm manner.

He said he does not regard them as a "breach of trust" by Kim.