SEOUL, May 16 (Yonhap) – U.S. trade relations with South Korea are more balanced than those with other Asian countries, with a bilateral free trade deal that was amended last year, the U.S. agriculture secretary has said.

"I think South Korea is more balanced. We currently have almost US$70 billion deficit with Japan, and not nearly that with Korea," Perdue said in an exclusive interview with Yonhap News Agency during his visit to Seoul on Thursday. "In fact, it has been trending down in a much more balanced fashion."

The secretary was in Seoul after visiting Tokyo where he demanded lower barriers for American agricultural products as part of efforts narrow a huge trade deficit with Japan.

The U.S., which is on a collision course with China over trade, is also set to decide this week whether to impose punitive tariffs on imported cars, mainly from the European countries and Japan.

"Trade is always about evolving and improvement," said Perdue, who served as the governor of Georgia from 2003 to 2011 and took the secretary job in 2017. "But we are very pleased with the relationship that we have with South Korea as a good customer." 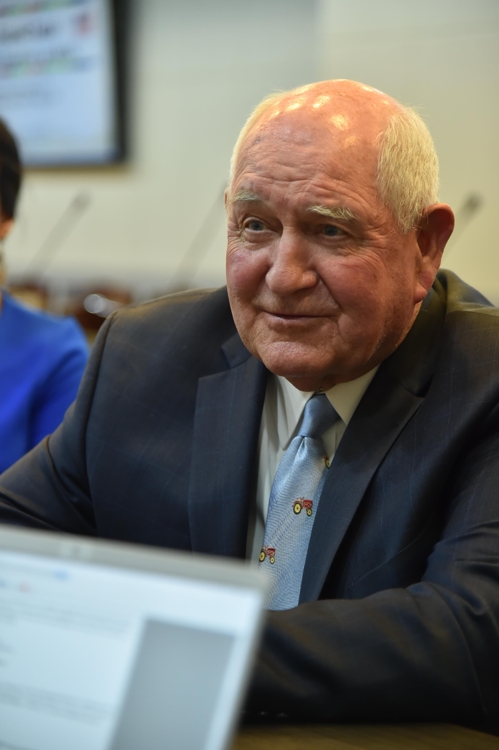 It marked the third consecutive year that the trade surplus narrowed, as Seoul has imported more American food products and energy in recent years.

The country imported $9.3 billion worth of American agricultural products last year, reaching an all-time high at a yearly growth of nearly 20 percent, according to the Korea Rural Economic Institute.

U.S. beef imports regained its No. 1 status here for the first time in 14 years in 2017 by beating Australian meat. Imports of other major U.S. products, including pork, corn, wheat, soybeans, and oranges, have also been rising steadily.

While Perdue was satisfied with South Korea's increased purchases of American beef and oranges, he wanted the Seoul government to further lower quarantine regulations for a wide range of American fruits and vegetables.

"We have a lot of items and agricultural products we believe citizens of South Korea will enjoy having access to," he said.

His call for easing access for U.S. foods comes at a time when Washington is making efforts to minimize damage on American farmers from China's upcoming retaliatory tariffs on its goods amid an all-out trade war.

Days after Washington announced higher tariffs on $200 billion in Chinese goods, Beijing said it will slap heavier duties on about 5,000 American products starting from next month, including beef, fruit and vegetables.

As a way to cope with the falling imports from China, U.S. President Donald Trump earlier said that Washington plans to purchase its own agricultural products to ship to "poor and starving countries in the form of humanitarian assistance."

Perdue said North Korea could be one of beneficiaries of the humanitarian food aid if Pyongyang fulfills its denuclearization pledges made in the 2018 Singapore summit between the two nation's leaders.

"The United States has been and will always be there in a humanitarian way, to help people, whether it is Venezuela, North Korea, or famines in other parts of the world," Perdue said. "I certainly believe the United States stands ready to support North Korea in many ways."

Before the move, the official stressed Pyongyang, which recently conducted missile tests, should come back to the negotiating table and take concrete steps to give up its nuclear weapons.

"We would like to see more progress in the discussion with North Korea. I wouldn't discount that," Perdue said. "We are hopeful that the North Korean conversations can be renewed in a very productive way."

North Korea is estimated to have produced 4.9 million tons of food crops last year, the lowest level since 2008, the World Food Programme and the Food and Agriculture Organization said, suggesting it needs to import about 1.59 million tons of cereal this year to feed its people.