SEOUL, May 16 (Yonhap) -- Shares in Hyundai Motor Group affiliates on Thursday fared better than other large-cap stocks on news that U.S. President Donald Trump will delay his decision to impose steep tariffs on imported auto and parts.

The Trump administration plans to delay the imposition of tariffs of up to 25 percent on imported cars and parts for up to six months as talks continue with Japan and the European Union, according to foreign media reports.

Moreover, South Korea is reportedly among the countries that will be exempted from the steep penalties sought by the U.S. on national security grounds.

Global credit ratings agencies said tariffs on imported vehicles and parts would be negative for most of carmakers, parts suppliers, dealers, retailers and transportation companies.

Moody's Investors Service said in a recent report that the tariffs, if implemented, would contract Korea's economic growth this year by 0.3 percentage point.

In its recent report, Fitch Ratings said, "Hyundai Motor Group has strong new product momentum this year, especially in the sport-utility vehicle segment where it had lagged in recent years."

But the potential penalties could pose great risks to the Korean automaker as the U.S. is the most important market to promote its vehicles for a continued growth, Fitch said.

Even partial tariffs would be devastating for Korean carmakers that are already suffering from weak sales in major markets, such as the U.S. and China.

The number of vehicles manufactured in Korea and shipped to the U.S. was some 800,000 units out of the country's total shipments of 2.5 million vehicles in 2018, according to the Korea Automobile Manufacturers Association (KAMA).

The U.S. is Korea's second-biggest trading partner after China. Korea shipped US$14 billion worth of vehicles to the world's most important automobile market last year.

"Given that three out of 10 exported vehicles were headed to the U.S. last year, any high import tariffs would deal a heavy blow to Korean carmakers," KAMA Vice President Kim Tae-nyen said by phone.

If the delay is officially announced, it will calm investors' concerns about Trump's protectionist turn and could revive their appetite for risky assets, analysts said.

The U.S. Commerce Department began its investigation in May 2018 as Trump asked it to determine the impact of imported cars and parts on national security.

In February, the department submitted its "Section 232" national security report to Trump for a penalty decision.

Through multiple channels, South Korean government officials and business leaders have met their U.S. counterparts to argue that it is inappropriate for the U.S. to use Section 232 against Korean exporters as Korea has already made concessions in a revised bilateral trade pact with the Trump government.

The revised trade pact allows U.S. carmakers to double their exports to Korea and the U.S. to extend tariffs on Korean pick-up trucks by 20 years to 2041. 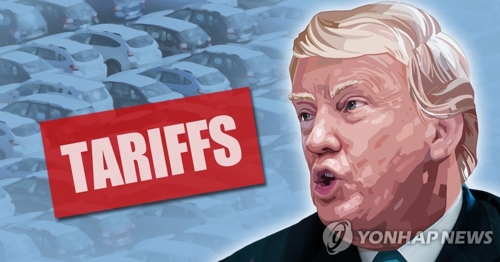