SEOUL, May 16 (Yonhap) -- The defense ministry said Thursday it has discovered a skeleton believed to be a South Korean soldier killed in the 1950-53 Korean War inside the Demilitarized Zone (DMZ) on the border with North Korea.

The set of human bones were found on Wednesday, along with a rank insignia of staff sergeant, military helmet, canteen and spoon, during excavation and demining work underway on Arrowhead Ridge, a former battle site inside the DMZ that separates the two Koreas, according to the military.

It is the first time that a whole skeleton has been found since the excavation project began in April, it said.

"We will carry out a detailed examination and DNA analysis for exact identification," the ministry said in a release.

Over the past week, the military found 57 more pieces of bones, bringing their total number found so far to 220, it added.

But the North has remained unresponsive to calls for jointly carrying out the project as agreed, leaving the South Korean military to carry out the operation alone. 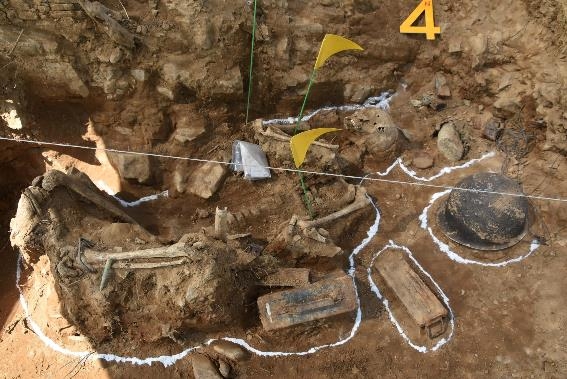