SEOUL, May 16 (Yonhap) -- The Army held a session to demonstrate the use of military drones, including suicide ones, on Thursday as part of efforts to improve its tactical operational capabilities by utilizing the latest technologies.

During the session, the first of its kind, held in Icheon, south of Seoul, the Army presented some 20 drones, which carried out a series of mock combat procedures from reconnaissance to strikes, decontamination and transportation.

Under the simulated battle scene, reconnaissance drones, equipped with a 360-degree camera and multi-spectral sensors, first flew to get a 360-degree view of a suspected enemy position that led to spotting targets. One drone then was deployed to drop mortar shells onto vehicles carrying 240-mm multiple rocket launchers, and the other one, with high explosives, dive-bombed the targets.

In response to the enemy's subsequent chemical attacks, several other unmanned aircraft were launched to decontaminate affected areas, and those in charge of transportation carried out missions to air-drop military supplies to isolated or remote regions in need.

With a goal to begin deploying the drones from around 2023, the Army plans to carry out more verification tests and to launch courses to train soldiers in their operation.

"We will also strengthen our capabilities of responding to growing cyber threats ... The latest technologies will provide chances for our military to open a new era," Jeong said in his speech during a military information conference in Seoul. 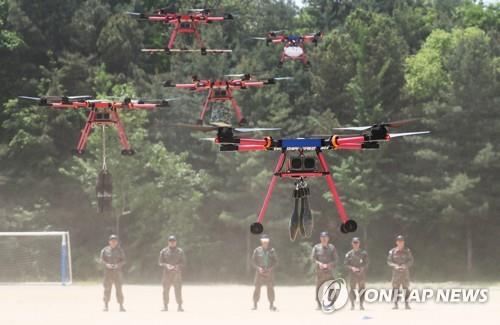