SEOUL, May 16 (Yonhap) -- North Korean media outlets on Thursday called on people to find new sources of water as the country struggles with a severe drought that could exacerbate the country's worsening food shortages.

Forecasting rain in the northern region earlier in the day, the Korean Central Broadcasting Station, a radio station for the North's domestic audience, said the precipitation is expected to fall short of ending the drought.

"As the amount of rainfall in the northern region will not be enough to overcome drought, the agricultural sector should thoroughly prepare measures to secure sources of water needed for farming," it said.

The North received 54.4 millimeters of rain or snow between January and early May, the smallest amount since 1982, when 51.2 mm of precipitation fell during the same period, according to the Korean Central News Agency. The amount represented a 42.3-percent drop from the previous years' average of 128.6 mm.

North Korean media outlets have been urging all-out efforts to fight drought, with the main newspaper Rodong Sinmun saying the "struggle to prevent damage from drought is a fierce battle against the nature to protect socialism."

In a separate report, the radio station highlighted Kumgang County in the eastern province of Gangwon as a good model that has been working intensively to prevent damage from drought, such as by constructing tens of facilities to reserve water flowing from the hills and fields.

Earlier this month, the World Food Programme and the Food and Agriculture Organization said in a joint report that North Korea's crop output last year hit the lowest level since 2008. They added that an estimated 10 million people in North Korea, 40 percent of its population, are in urgent need of food. 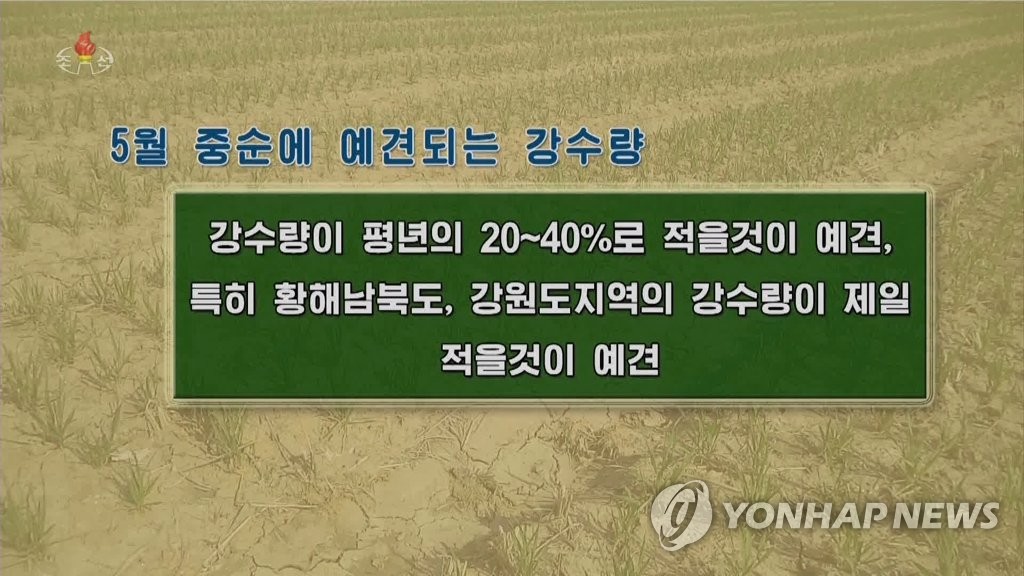