SEOUL, May 16 (Yonhap) -- A local court on Thursday acquitted Lee Jae-myung, the governor of Gyeonggi Province, of charges of abuse of authority and election law violations.

The Seongnam branch of the Suwon District Court found Lee innocent of all four criminal charges, including forcibly admitting his elder brother to a mental hospital in 2014 and spreading false information ahead of last June's local elections.

The court said there were not sufficient grounds to conclude that Lee's elder brother was forcibly hospitalized.

Lee's trial has drawn strong media attention, as he governs South Korea's most populous province, which surrounds Seoul, and is mentioned as one of the ruling bloc's leading presidential hopefuls. Lee unsuccessfully ran against Moon Jae-in the Democratic Party race to pick its presidential candidate in 2017.

By law, Lee would lose his gubernatorial post if he was convicted of abuse of power and got a sentence heavier than imprisonment, or if he is fined more than 1 million won on the charge of spreading false information in relation to public elections.

Political pundits say a conviction could have dealt a blow to the ruling party's preparations for the next presidential elections in 2022.

After the ruling, Lee told reporters and supporters that he will repay all province residents for their trust in him during court hearings.

He also thanked the court, saying judges have once again confirmed the judiciary is the last bastion of human rights and democracy.

Lee, who belongs to the ruling Democratic Party, served two mayoral terms in Seongnam, a city south of Seoul, from 2010 to 2018 before being elected Gyeonggi governor last June.

He was earlier indicted on four criminal charges and referred to trial. 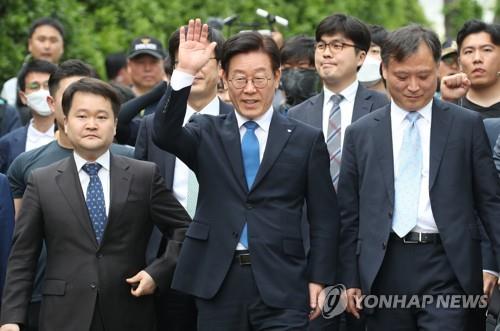 Lee was accused of abusing his power when he served as the mayor of Seongnam to force his estranged older brother into a mental hospital. Lee's brother, Lee Jae-seon, was admitted to a mental hospital in November 2014 and died of lung cancer in 2017.

The governor was also accused of violating the election law by denying in a TV debate last year that he had been fined 1.5 million won (US$1,259) in 2002 for falsely representing himself as a prosecutor. He was also accused of announcing false information about a development project in Seongnam.

In the last court hearing, on April 25, prosecutors demanded a one-and-a-half-year prison sentence for Lee on the abuse-of-power charge and a fine of 6 million won for election law violations.