At the end of her five-day trip to Washington, Yoo said she met with U.S. trade officials to underscore Seoul's position on the tariffs and will wait for the outcome that is due by Saturday.

"I want to say that we did our best until the very end to ensure the Section 232 measures aren't applied to South Korean cars," the minister told reporters at Washington's Dulles International Airport before boarding her flight to Seoul.

On news reports that South Korea will be exempted from any future tariffs, she said she won't "get ahead of" the Trump administration's decision.

"An official announcement by the U.S. is forthcoming, so we have to wait," she said.

U.S. President Donald Trump was expected to announce by Saturday whether to go ahead with imposing tariffs of up to 25 percent on imported autos and parts on national security grounds under Section 232 of the Trade Expansion Act.

News reports Wednesday said Trump will delay the decision by six months while continuing negotiations with the European Union and Japan.

According to a draft executive order obtained by Bloomberg, Trump will also exempt South Korea from any future tariffs because the ally has renegotiated its bilateral free trade agreement with the U.S. 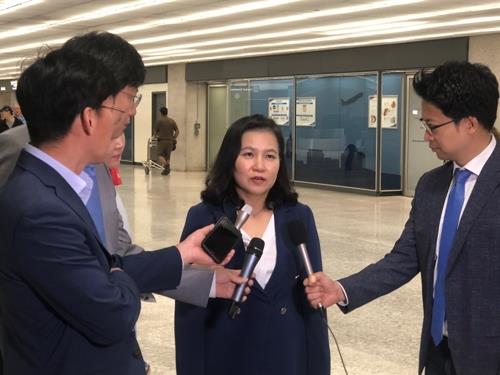