HWASEONG/GOYANG, South Korea, May 17 (Yonhap) -- Lim Ju-wan, who has been raising flowers for more than 30 years, normally starts the day by taking out his smartphone to check his greenhouse instead of going outside to his land like traditional farmers.

"I do not need to physically go to the greenhouses by myself as I can see what's going on there through my smartphone," Lim said, marveling at how things have changed for the better compared to the past, when he really had no choice other than to actually deal with routine, time-consuming chores.

Lim is the representative of a floriculture cooperative of nine farms based in Goyang, north of Seoul, that raises roses at smart greenhouses covering a combined 44,000 square meters of land.

Annually, the cooperative produces 130 tons of roses, with around 30 percent of the produce being shipped to Japan.

The union is one of South Korea's pioneers in adopting smart farming, the concept of utilizing cutting-edge technologies to allow farmers to control all aspects of raising crops automatically and through remote control methods. "I travel abroad often to find out the latest trends in the flower industry. But I do not have to worry about leaving my flowers unattended as long as I have an Internet connection," Lim said.

A smart farm is capable of automatically controlling environmental conditions such as temperature based on its database customized for different crops. Even sprinkling pesticides can be done without the intervention of people.

"Now, farmers can just focus on improving the quality of produce as other minor work is being taken care of by the smart farming solution," he said.

Agricultural Corporation Wooil Farm Co., based in Hwaseong, south of Seoul, is another example of how smart farming solutions can revolutionize the traditional agricultural industry.

The smart farm, South Korea's largest, producing around 3,000 tons of tomatoes annually, said its staff members do not even have to stay at the monitoring office as they can check the status of the farm through their smartphones.

"I believe that smart farming solutions have minimized the intervention of people at farms. We would have had to hire 20 percent more staff members if it was not for smart farming," You Hyun-sung, a director of Wooil Farm, said.

Here, nearly all processes are automatic. In the greenhouse, which plays music that is supposedly beneficial for plants, the workers' main duties center on picking tomatoes and then putting them on carts that automatically move to the sorting conveyor.

"All environmental elements such as humidity, light and ventilation are managed by the smart farming system. We believe that the amount of produce can increase roughly 30 percent with the help of the solution," You said.

"Previously, farms focused on adopting automation. But that did not lead to comprehensive management of farms," You said. "With smart farming, we are now able to produce better quality produce that is more appealing to the market." Wooil Farm is considered one of the role models for South Korea's smart farming ecosystem as it efficiently manages energy consumption, utilizing both geothermal heat and liquefied petroleum gas.

South Korea's Ministry of Agriculture, Food and Rural Affairs first launched the smart farming initiative in 2014 under a vision of fostering agricultural products as a new cash cow like semiconductors and cars.

The country has already made notable progress in the past five years, with smart farms producing 30 percent more crops compared to traditional farms while cutting back labor costs by 20 percent.

"South Korea's agricultural segment has been facing hurdles in terms of the aging population and the falling number of workers," Jeong Jeong-hee, the deputy director of the ministry's smart farm team, said.

While the smart farming industry is still in a nascent stage here, the ministry said it will continue to push for ways to create solutions that are more accessible for younger farmers, the official said.

"By adopting smart farms, we can induce younger people who are familiar with the latest technologies to join the agricultural sector," the official said.

In line with the plan, the government aims to establish so-called smart farm valleys at four locations throughout the country by 2022, where young farmers can rent plots of land for smart farms at reasonable fees for three years before deciding on their future course of action in the sector.

The government plans to invest around 64 billion won (US$54 million) in each smart farm valley, which aims to foster 500 young agricultural experts by 2022. The tenants of the smart farm valleys will be provided with low-interest loans to minimize their financial burdens. 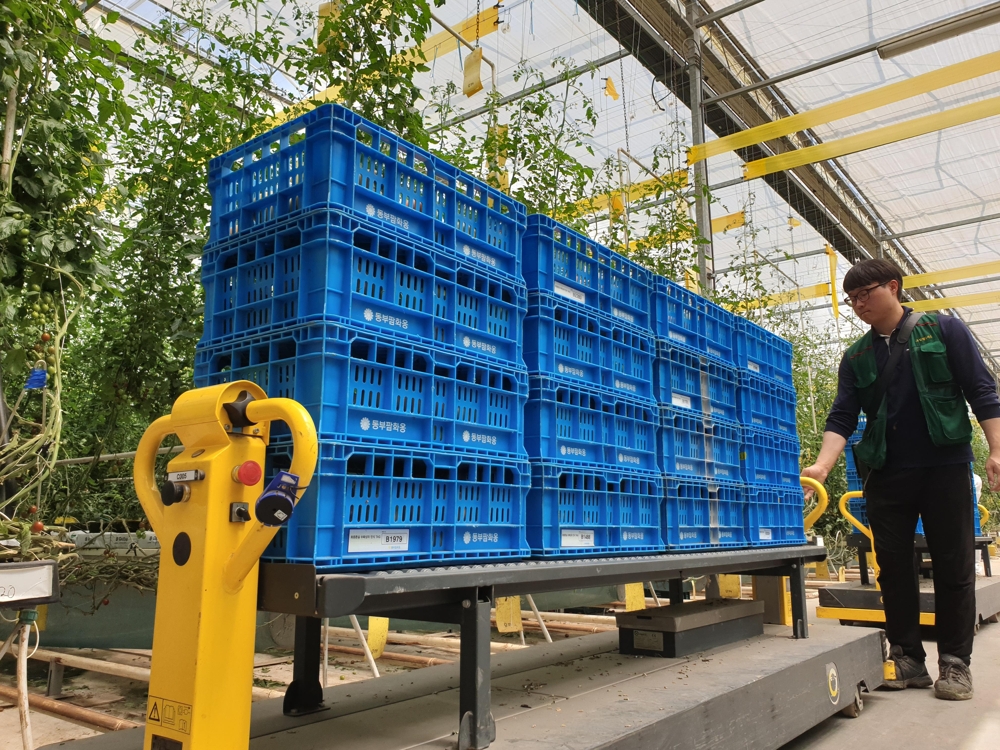