SEJONG, May 17 (Yonhap) -- South Korea on Friday warned of growing downside risks stemming from the slowing global economy and lower demand for semiconductors.

South Korea's main economic indicators, such as facility investment and exports, remained weak in the first quarter amid growing downside risks, the Ministry of Economy and Finance said in its monthly economic assessment report.

The report also said the trade war between the United States and China has emerged as a volatile factor in international financial markets amid lingering uncertainties over Britain's planned departure from the European Union.

The report -- called the Green Book -- is based on the latest economic indicators of such key factors as output, exports, consumption and corporate investment, which provide clues as to how Asia's fourth-largest economy has been faring in recent months. 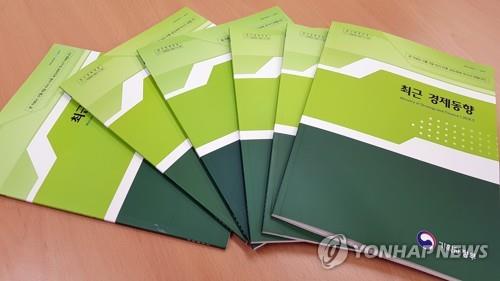 South Korea's exports fell 2 percent in April from a year earlier, extending their on-year decline to fifth consecutive months, due to a drawn-out slump in chips and weak demand from China.

South Korea is concerned that its outbound shipments of semiconductors and intermediate products to China could suffer a further setback in case of the deepening trade war between the world's two largest economies, which are also Seoul's key trading partners.

Asia's fourth-largest economy unexpectedly contracted an estimated 0.3 percent in the first quarter of the year from three months earlier, marking the worst performance in a decade.

The Bank of Korea slashed its economic outlook for the year to 2.5 percent from 2.6 percent, which is slightly lower than the government's target of between 2.6 percent and 2.7 percent.

In March, Moody's Investors Service revised down its growth outlook for South Korea's economy this year to 2.1 percent from its previous forecast of 2.3 percent in November last year, citing lower demand for intermediate products from China.