The combined net profit of 573 non-financial companies listed on the main bourse came to 20.9 trillion won (US$17.6 billion) in the January-March period, down 38.8 percent from a year ago, according to the data from the Korea Exchange and the Korea Listed Companies Association.

Sales of the firms, which close their books in December, edged up 0.2 percent to 484.3 trillion won, with their operating profit dipping 36.9 percent to 27.8 trillion won.

The bottom-line drop was attributed mainly to a decline in South Korea's exports in the wake of a trade war between the United States and China, as well as a global economic slowdown. 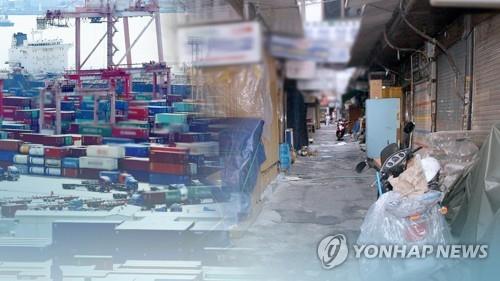 "Listed companies, many of which are exporters, posted sluggish sales and earnings in the first half, hit by those negative external factors," Koo Yong-wook, an analyst at Mirae Asset Daewoo Securities, said.

Nearly 75 percent of the firms, or 430, were in the black, with 143 firms posting net losses. The remainder swung to a profit or a loss.

Their debt-equity ratio came to 112.4 percent as of end-March, up 6.8 percentage points from three months earlier.