SEOUL, May 17 (Yonhap) -- Daewoo Shipbuilding & Marine Engineering Co., a major shipbuilder here, said Friday it has secured 480 billion won (US$401 million) as it delivered a drill ship to an Angolan customer.

Daewoo Shipbuilding said it handed over the last of two drill ships to the Angolan state oil company Sonangol, which ordered the two drill ships from the South Korean shipyard in 2013. The first drill ship was delivered in March after resolving a yearslong dispute over a delay in delivery.

The payment from the latest delivery will provide fresh liquidity to the shipbuilder that has been struggling to improve its financial health.

Daewoo Shipbuilding saw net profit fall 13.7 percent on-year to 195 billion won (US$163 million) in the first quarter of the year, while operating profit and sales also declined compared to a year earlier. 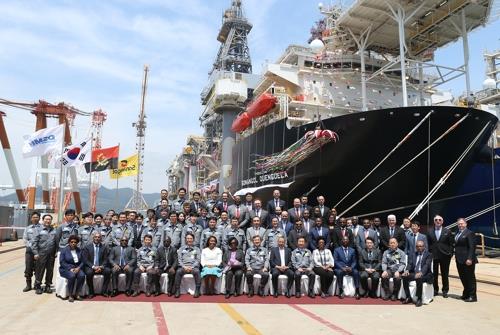