SEJONG, May 17 (Yonhap) -- South Korea's finance minister has called China a competitor but also said there is ample room for expanding bilateral economic cooperation with its larger neighbor.

"China is an economic partner and a well-intentioned competitor," Hong Nam-ki, the minister of economy and finance, said in a recent interview with global credit appraiser Fitch Ratings posted on its website. 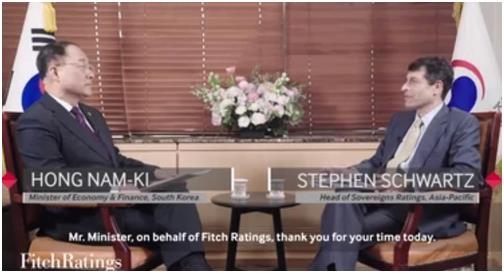 Competition between South Korea and China has been intensifying in recent years as the world's second-largest economy has been experiencing rapid technological development in high-tech industries.

Still, Hong said South Korea maintains competitive and technical advantages in areas where it has traditionally been strong, such as semiconductors, electronic displays and petrochemicals.

"Even though there are some views that China is a major threat to the South Korean economy, I think that in general, rather than a threat, China is a competitor and a trading partner on the same path," Hong said.

Hong also said the scope of economic cooperation that can benefit both countries will greatly expand if the two sides complete subsequent negotiations on services, investment and finance as part of their free trade deal.

The free trade agreement -- which took effect in 2015 --- has largely focused on removing tariffs on goods.