SEOUL, May 20 (Yonhap) -- A nocturnal stroll under a full moon at Changdeok Palace, the only UNESCO-recognized royal palace of the five from Korea's last kingdom of Joseon, provides the kind of experience a Joseon king would have savored in the lavish palatial compound.

The royal palace, a UNESCO World Heritage site, usually opens itself up to nighttime visitors in the spring and fall seasons every year under the Cultural Heritage Administration's special tour program, the Moonlight Tour. This year's spring program kicked off in April and runs till June. 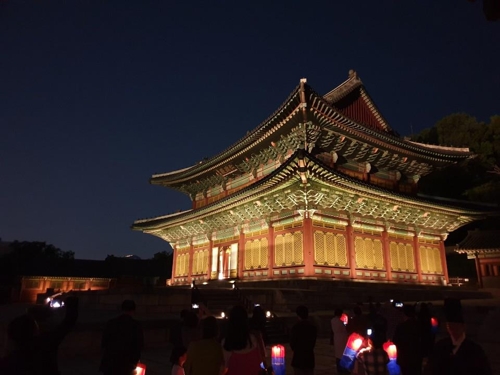 The gate leads to the ornate 600-year-old stone bridge Geumcheon, National Treasure No. 1762, immediately throwing visitors back to the time of the pre-modern Korean kingdom, away from the surrounding city lights and noise in central Seoul.

The tour of the pitch-dark palatial compound comes with a hand-held lantern produced in the style of the Joseon-era royal candle wrapped in blue silk and a guide clad in "hanbok," traditional Korean attire, who talks in whispers and can be heard through the receiver loaned to each visitor.

The nightly program naturally includes a guided tour of the palace's two major royal edifices -- Injeongjeon, which houses the royal throne, and Nakseonjae, King Heonjong's private library and a living place for his beloved mistress.

A nighttime look at the majestic royal hall with a two-tier roof, illuminated in soft orange light, brings out the red-brick, yellow and green colors of the ornate royal paintings that line the exteriors underneath the roofs, in a more vivid manner.

The absence of sunlight also blacks out the background to bring the visitors' full attention to every detail of the illuminated Injeongjeon, whose sliding roofs cut fluent curves against the backdrop of the dark sky. 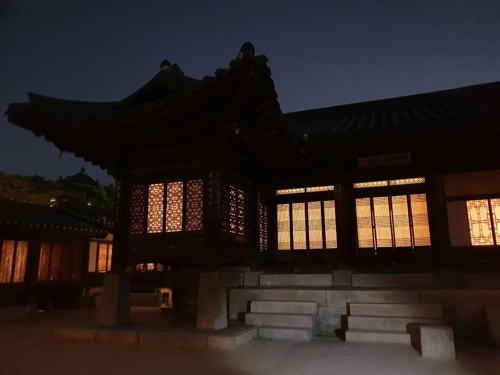 Nakseonjae is a scene far humbler than the previous destination, but it gives a rare glimpse of the intimate inner lives of Joseon's ruling Yi family, having hosted the last remaining Yi family members as recently as 30 years ago.

The living quarters are void of typical royal buildings' lavish roof paintings, but their paper-paned doors are ornately adorned with an assortment of the era's most refined muntins, some of whose lacy patterns symbolize fecundity and eternity.

Bright lights from inside the rooms put the luxurious wood works over the white paper doors into a clear view against the dark background.

"This is where Joseon's last crown princess, Yi Bang-ja, and Princess Deokhye, the youngest daughter of Emperor Gojong, had lived till 1989. It was off limits till some 30 years ago," guide Jeong Ah-young told her small tour group last week.

"As the lights were left on, the house gives a feeling that the royal family might still be living inside," she said.

The Moonlight Tour continues with the exquisite backyard of Nakseonjae, as well as the far bigger royal garden quarter of the palatial compound, both of which remain out of reach to the public except on special occasions.

A narrow dark pathway from Nakseonjae's backyard opens up to the only remaining full-size garden of the Joseon kings, which is dominated by a tranquil, spacious pond named Buyongji, the crown jewel of the tour program. 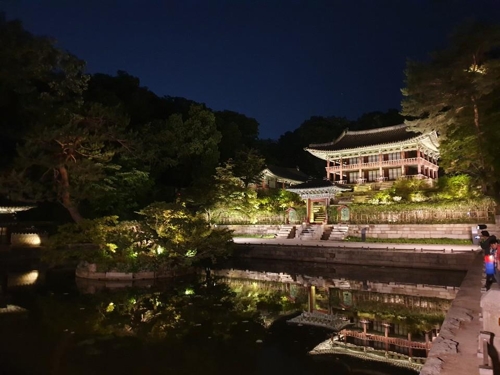 The garden hosts a zelkova tree that's hundreds of years old and witnessed the Yi (Lee) family's glorious rise to the throne through the kingdom's thriving reign to its humiliating fall.

The pond's water surface exquisitely carries the luminous reflection of Kyujanggak, the two-story royal library, which dates back some 250 years.

"This garden embodies the philosophy of the people from the Joseon era who thought nature is most beautiful as it is," the guide said through the receiver.

The Buyongji area is better known to the public as the main setting for the popular 2016 KBS period drama series, "Love in the Moonlight," where actor Park Bo-gum played a young, intelligent Joseon crown prince. It was also featured in the wildly successful 2003 MBC period drama series "Daejanggeum," whose English title is "Jewel in the Palace."

Radiant sounds of a Korean bamboo flute and a Korean string instrument played by musicians in hanbok help guide visitors, doubling the delight of the program.

"During the nighttime (in the Joseon era), there were some 3,000 people inside the palace, 2,000 of them were soldiers. Of them all, only the king and his family members or those who were specially invited by the king could take a stroll around the palace like we do today," the guide said. "You, visitors on the Moonlight Tour, are like a king's guests from the point of view of that era." 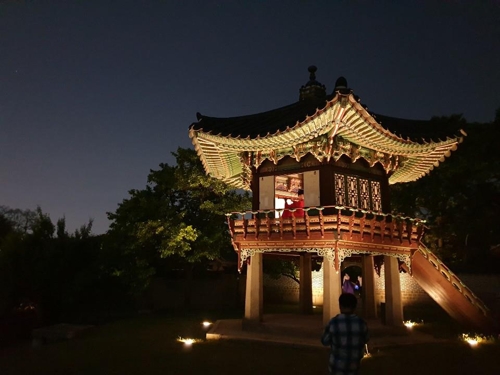 The two-hour journey is capped with a 30-minute concert at a small, royal outdoor stage, consisting of four different traditional dance and music performances, including an inspiring shadow play where major Changdeok Palace edifices are featured. A cup of a traditional Korean beverage and cookies are provided as refreshments.

The Moonlight Tour requires a reservation, and 100 people are admitted in guided small groups each Thursday, Friday, Saturday and Sunday during the program's some eight-week run this spring.

Verifying the program's highly positive reviews, every ticket for the Korean language guided tours on Thursday, Friday and Sunday this season is already all sold out. Tickets for Sundays when the tour is guided in English are reserved for foreigners.

But the program will resume once again in the autumn, in which Chuseok, Korea's equivalent of Thanksgiving, falls, casting the fullest moon of the year over the nightly journey through the palace.