(ATTN: UPDATES with quotes from participants in paras 6-11)

SEOUL, May 19 (Yonhap) -- Braving rain, thousands of children and their parents took part in an annual mini marathon Sunday co-hosted by the international charity Save the Children to help needy children around the world.

They had chances to think about children suffering from hunger and disease in Asia and Africa while running or walking a 4-kilometer course.

"Today is the day when Save the Children was founded 100 years ago," said Oh Joon, chair of the board of the charity group, during the marathon's opening ceremony. "I hope you can enjoy today although the weather is chilly after the rain." 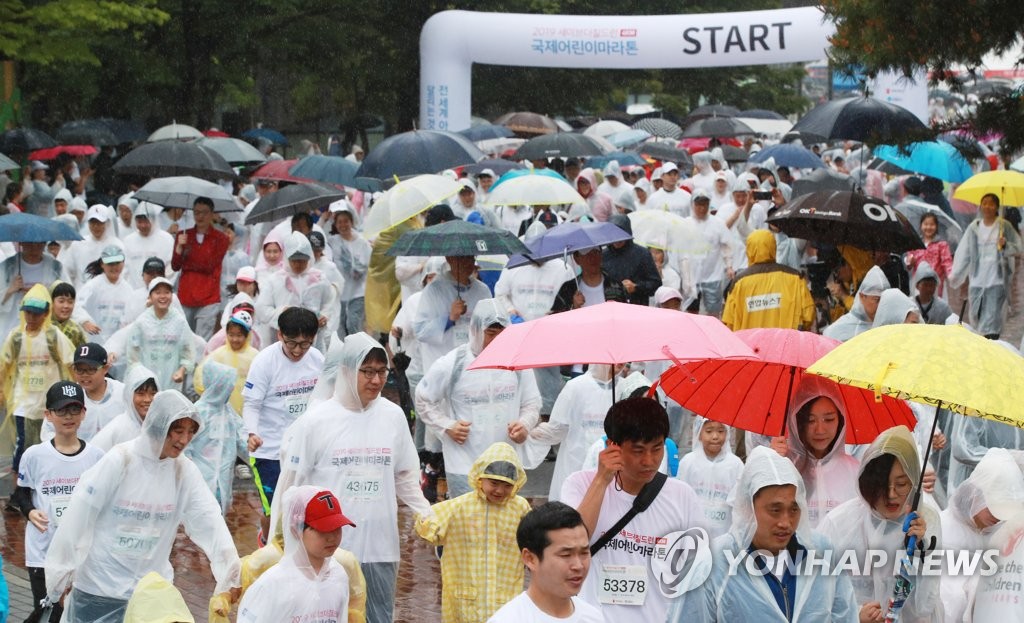 "Many children are here with their family members as May is the month of family. I hope you all will have a good time," Cho Sung-boo, president and CEO of Yonhap News Agency, said in his congratulatory speech.

After the ceremony, participants moved to the start zone after warming up.

The majority of them were wearing raincoats or holding umbrellas due to the rain that started in the morning, yet their faces were bright.

"In fact, I was worried about whether to attend the event or not after watching a weather forecast," said Lee Jun-myeong, who came from Goyang, just northwest of Seoul, with two children. "But I decided to come because my children who took part in last year's event nagged me, saying they wanted to go again," he said, smiling brightly.

Kim Jin, a resident in Seoul, said she finished the race with her 6-year-old daughter and husband.

"Since my girl is young and it rained, I walked and also ran holding her in my arms, and managed to cross the finish line pushing her in a stroller," she said.

"I was worried that her shoes were all wet, but she was so happy. ... I felt good because I was able to make good memories and donate by simply running."

All proceeds from the entry fees -- 10,000 won (US$8.36) per person -- will be spent on projects to save children suffering from poverty in and out of the country, and improve children's rights. Participants were given a medal and a certificate of volunteer service.

Save the Children has organized the event in Seoul since 2011. This year, it held a similar event in the central city of Sejong on May 5 and will hold one in Busan on Saturday.
(END)