(ATTN: UPDATES with more comments and background in paras 13-18)

Hong Nam-ki, the minister of economy and finance, said South Korea will strengthen the monitoring of financial markets and take preemptive actions against a risk factor amid the escalating trade frictions between the United States and China.

The U.S. has raised its import tariffs to 25 percent from 10 percent on US$200 billion worth of Chinese products. In a tit-for-tat response, China has announced that it will levy higher tariffs on $60 billion worth of U.S. goods.

"We plan to maintain market stability through appropriate measures for stability if volatility increases due to an excessive one-sided movement in financial markets," Hong said in a meeting with officials in Seoul. 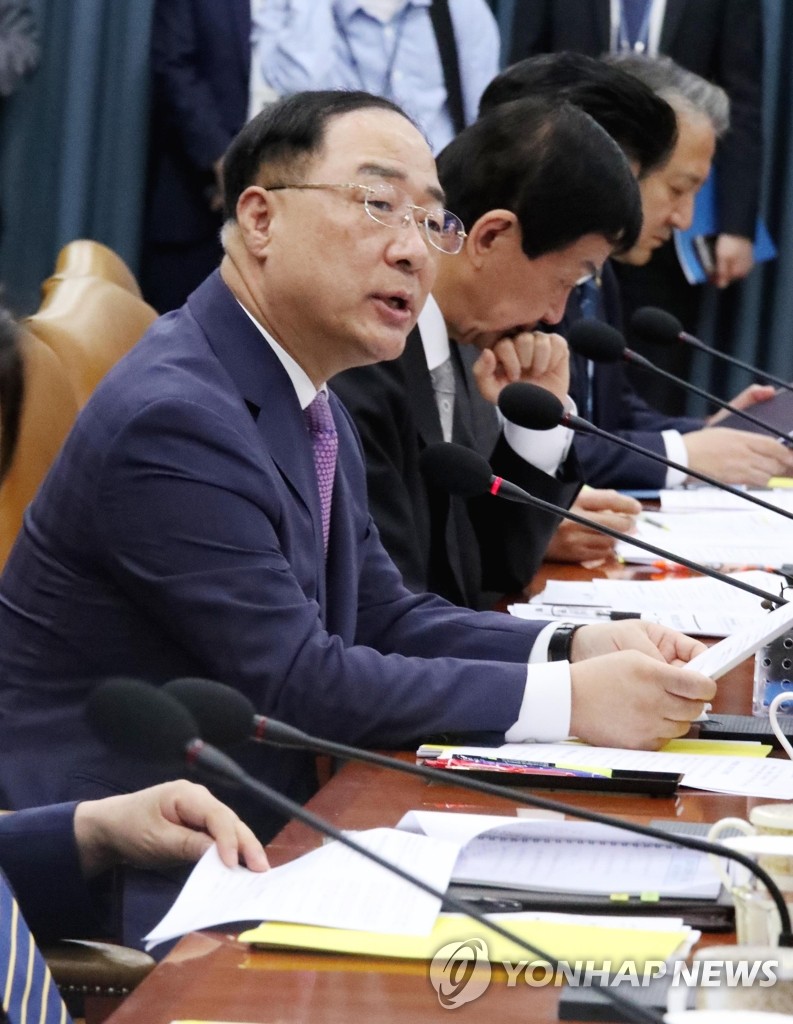 Hong did not elaborate on what he meant by appropriate steps, but his comments suggest that South Korea could intervene in the foreign-exchange market to stem the decline of the local currency against the U.S. dollar.

Last Friday, the local currency closed at 1,195.70 won to the dollar, marking a 28-month low against the greenback over the trade frictions between the United States and China.

South Korea's financial authorities sold $187 million in the second half of 2018 to help stabilize the market, the Bank of Korea said in March.

Hong also said any fallout from the trade frictions between the world's two largest economies could seriously affect South Korea. The U.S. and China account for a combined 39 percent of South Korea's exports.

Hong said South Korea will try to diversify its export markets by speeding up its talks with the Philippines, Malaysia and Indonesia on forging free trade agreements.

South Korea has sought stronger economic ties with Southeast Asian countries to reduce its heavy reliance on large markets, like the United States and China, and to foster new growth drivers.

South Korea has clinched a series of free trade agreements with major trading partners, including the U.S. and China, as well as Chile, Peru, Colombia and the Association of Southeast Asian Nations in recent years as part of its efforts to boost the country's export-driven economy and diversify its export markets.

Also Monday, Hong said he had intensive discussions with officials on possible U.S. auto tariffs, saying South Korea cannot be sure whether its cars will be exempted from higher tariffs.

Last week, U.S. President Donald Trump delayed a decision on whether to impose tariffs on imported cars and parts by up to six months.

Trump said that he agrees with the findings of the U.S. Commerce Department in February that the current level and circumstances of car imports "threaten to impair ... national security" as defined in Section 232 of the Trade Expansion Act.

South Korea made concessions on automobiles in the revised bilateral free trade agreement that went into effect in January, though concerns persist about possible U.S. tariffs on South Korean vehicles.

South Korea has repeatedly asked the United States to exempt South Korean cars from higher tariffs, saying South Korea, a close ally of the U.S., does not pose a threat to U.S. security.