SEOUL, May 20 (Yonhap) -- The presidential office, the government and the ruling party will seek to establish a state investigative control tower as part of the drive for police reform, officials said Monday.

The move is aimed at preventing police officers in charge of non-probe affairs from being involved in investigations and blocking intelligence officers from intervening in politics.

The three parties also agreed to encourage the National Assembly to speed up its legislative efforts to introduce an autonomous police system, under which authority over public security-related affairs will be transferred to provincial governments from the state police agency.

The decision came after officials from the presidential office Cheong Wa Dae, the ruling Democratic Party (DP), the state police agency and relevant ministries held a meeting over police reform.

"We will seek to decentralize the police's power by seeking to control involvement in probes by police officers in charge of non-probe affairs and pushing to swiftly implement the autonomous police system," Rep. Cho Jeong-sik, policy chief of the DP, told reporters.

"To prevent ranking (police) officials' inappropriate intervention (in politics), we will push for the creation of a state investigative control tower," he added.

The drive for police reform came as the government is seeking to empower police to have bigger authority to conduct probes as part of broader plans to overhaul the prosecution. 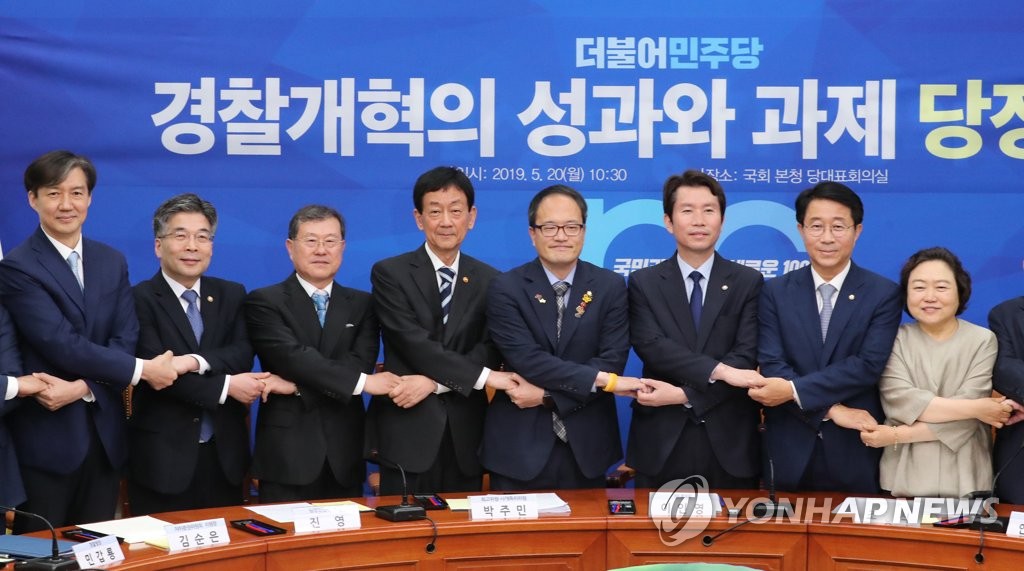 The proposed adjustment of investigative power is one of the key election pledges by the liberal President Moon Jae-in.

The move is aimed at keeping in check the prosecution's massive authority but also raises the need to draw up measures to curb what could be the police's colossal authority to conduct investigations.

The prosecution has openly denounced the investigative power reform. Prosecutor-General Moon Moo-il reiterated his criticism of bills on the overhaul, saying they fly in the face of democratic principles.

Cho Kuk, senior presidential secretary on civil affairs, said a legal revision is required to permanently prevent police officers in charge of collecting intelligence from becoming involved in illegal acts, such as those that took place under previous conservative governments.

Amid escalating tensions between the prosecution and the police, each organ has launched probes into former chiefs of the other over alleged illegal acts.

The prosecution has recently sought arrest warrants for two former police chiefs on charges of illegally intervening in politics in 2016. One of them was arrested last week on charges of his involvement in the 2016 elections during the Park Geun-hye government.

The case highlighted suspected intervention in politics and illegal surveillance of civilians by police officers handling intelligence during the previous conservative governments.

"The reform of powerful organizations should be pursued in a way that ensures the curbing of abuses of power, decentralizing of powers, and seeks balances and checks among such organs," Cho said.

In early May, a parliamentary panel placed key bills on political and judiciary reforms on a fast track. Proposals for police reforms were not designated as fast-track bills.

To keep the police's power in check, the prosecution raised the need to strip the police of the extensive right to collect intelligence.

It also called for a full-fledged introduction of an autonomous police system, under which police stations and regional police agencies are governed by provincial governments, not by the state central police agency. The government seeks to adopt it in a limited manner.