Earlier in the day, the ministry received a formal request for the panel's establishment. Tokyo bases it on dispute settlement procedures laid out in a 1965 state-to-state accord that normalized bilateral ties after Japan's 1910-45 colonization of the peninsula.

"The government will prudently look into it, factoring in all related elements concerning the move by the Japanese side," the ministry said in a text message sent to reporters.

Tensions have run high between the neighbors as Japan has protested South Korean Supreme Court rulings last year that ordered Japanese firms to compensate South Korean victims of forced labor. Tokyo argues that all colonial-era reparation issues were settled under the 1965 deal.

The Japanese firms have not complied with the court orders, prompting the victims to take legal steps to seize or liquidate the companies' assets based in Korea, and Japan to warn of "countermeasures" to protect the companies.

The 1965 accord stipulates that the two sides are to settle any dispute related to the accord primarily through diplomatic channels. If they fail to settle it, the case can then be referred to a commission involving a third-country arbitrator agreed on by the two sides.

In January, Tokyo called for bilateral diplomatic talks with Seoul.

Seoul has remained unresponsive to the call while maintaining that a government cannot meddle in a court decision under a democratic system that separates three powers -- the executive, legislature and judiciary.

During a parliamentary session, Japanese Foreign Minister Taro Kono pointed to South Korean Prime Minister Lee Nak-yon's recent remarks on the Seoul government's "limits" in handling the issue as one reason for Tokyo's request to form the arbitration panel.

"It is regrettable, but there were such remarks from the person in charge. ... (Tokyo) has notified Seoul of this as it has not accepted the call for (diplomatic) consultations for more than four months," Kono said.

Kono also called for Seoul to "clearly" respond to the issue, arguing that it is eroding the "legal foundation" between the two countries.

Seoul and Tokyo are currently coordinating over possible talks between Foreign Minister Kang Kyung-wha and Kono on the sidelines of a ministerial gathering of the Organization for Economic Cooperation and Development slated to be held in Paris on Wednesday and Thursday.

Observers said Seoul is unlikely to accept the request, given its reluctance to weigh in on issues of civil litigation involving private citizens.

They also said Japan appears to be trying to build its case that it has been taking due diplomatic steps to settle the historical dispute, so as to shape international opinion in its favor.

The observers, moreover, noted that Tokyo's move underscores its apparent hope to put to rest the unpalatable issue, which, if not handled properly, could undermine its post-war settlements with countries affected by its past imperialism. 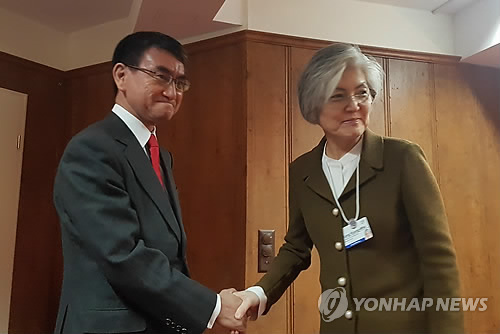