SEJONG, May 20 (Yonhap) -- South Korea's industry minister said Monday that the government is not considering a hike in electricity rates due to the state utility's ballooning losses.

"Raising electricity rates due to the losses of Korea Electric Power Corp. (KEPCO) is not on the table at the moment," Industry Minister Sung Yun-mo said in a meeting with reporters. "But the government will have to review (rate adjustments) when the time is ripe."

The minister said several factors may be behind KEPCO's first-quarter losses, but the main culprit appears to be increased costs stemming from rising oil prices, the minister said.

"The issue of KEPCO's losses and the country's electricity rates should not be dealt with as a whole. The government didn't cut rates in the past when KEPCO was in the black." 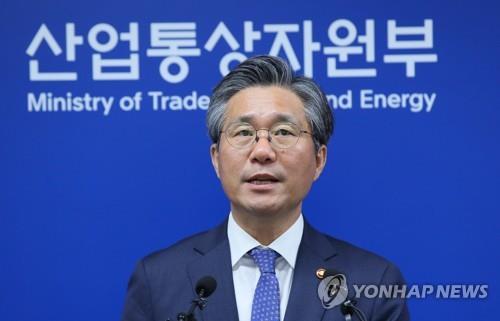 The red ink came after KEPCO posted an operating loss of around 200 billion won last year.

Sung also said the ministry will soon announce whether to adjust the residential progressive electricity tariffs for summer as it did last year.

The government revised the first two stages of the progressive tariffs for residential power use for July and August to ease the household burden from heavy electricity bills caused by the unprecedented summer heat.

KEPCO currently applies three-stage progressive rates for residential power usage, which creates a threefold difference in electricity bills paid by homes using a lot and those that are thriftier.

The current system has come under flak for adding a burden on low-income households with several family members compared with single-person households with high incomes during the peak summer and winter seasons.
(END)