(ATTN: UPDATES with details, background throughout)

SEOUL, May 22 (Yonhap) -- The government said Wednesday that it plans to submit a motion to seek parliamentary approval for three of four key International Labor Organization (ILO) conventions.

The move signals an about-face by the government that had kept a negative stance about seeking the ratification before a legal revision by the legislative body.

South Korea is under pressure from the European Union (EU) to ratify four ILO conventions on the grounds that Seoul has not made sufficient efforts to approve the ILO provisions as agreed in their free trade agreement (FTA) implemented in 2011.

South Korea joined the United Nations agency on labor in 1991 but hasn't ratified its four key conventions -- conventions No. 87 and No. 98 on freedom of association and conventions No. 29 and 105 on abolition of forced labor.

"The government will seek parliamentary approval of three out of the four conventions," Labor Minister Lee Jae-kap told a press briefing.

Lee said the government will seek parliamentary approval of conventions No. 87, No. 98 and No. 29.

He added that the labor ministry plans to prepare for the motion to enable it to be submitted to the National Assembly during its regular session that will kick off in September.

The potential ratification of the conventions is expected to allow jobless people and laid-off workers to join labor unions.

Seoul excluded convention No. 105 that bans compulsory labor as punishment for activities including the expression of political opinions and participation in a labor strike.

The minister said it is hard to seek to ratify the convention at the current stage as the issue is linked to the overhaul of the country's penal system.

The country's national security law, which bans South Koreans from engaging in activities benefiting North Korea, is widely viewed as violating this convention.

There are mounting concerns that the EU may take retaliatory trade measures against the South, as it warned in April that it will launch an expert panel to review South Korea's compliance with the FTA if Seoul fails to ratify the key labor conventions.

The ratification of the key labor conventions is one of top priorities set by liberal President Moon Jae-in.

In April, a blue-ribbon panel on labor relations unveiled its proposal to improve labor practices for the ratification based on opinions from the labor and business sectors.

But businesses oppose the proposal, saying that it did not fully include companies' demand to draw up tools to protect their managerial rights. 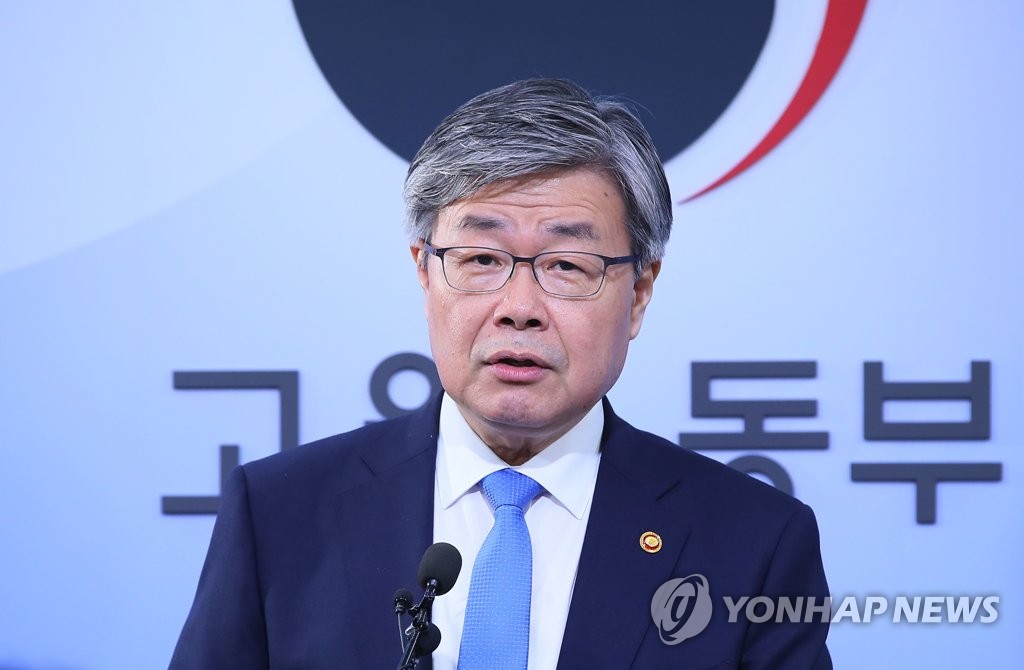