The new movie from the "Snowpiercer" and "Okja" director tells the story of a poor family becoming obsessed with a rich one after their son gets a job as a tutor for the wealthy family. Renowned actor Song Kang-ho stars in the film, along with Lee Sun-kyun and Cho Yeo-jeong.

This is Bong's fifth time at Cannes, following screenings of "The Host," at the Directors' Fortnight in 2006, and "Okja," his first work to be nominated for the main competition section in 2017.

Dressed to the nines, the audience filling the 2,300-seat Grand Theatre Lumiere burst into applause after the two-hour-plus film came to an end with closing credits and lights up. None of those present, including Tilda Swinton, who starred in "Snowpiercer," left their seats until the very end of the event. 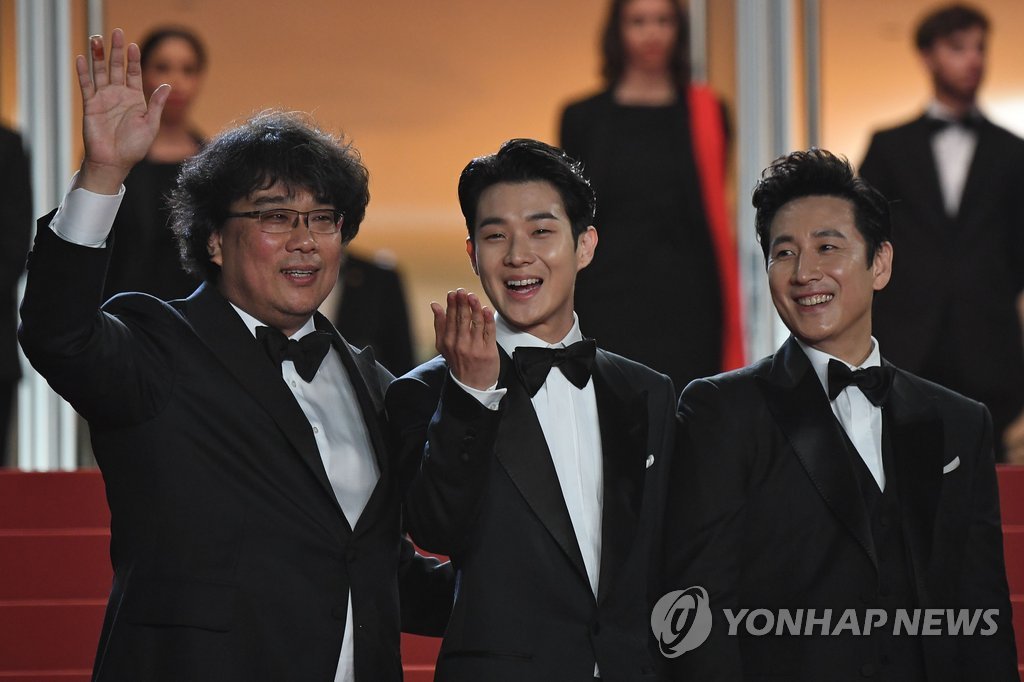 Director Bong and cast of the movie remained fixated amid the adulation from the audience.

"Thank you everyone. Let's all go home," Bong said in the midst of the standing ovation, saying goodbye to the crowd as the screening finished after midnight.

But the clapping and cheering continued even after Bong's farewell.

A French viewer, who identified herself only as Eglantyne, said she loved the movie because of its dark humor.

A male viewer said he prefers "Parasite" to "Once Upon a Time in Hollywood," the new film written and directed by Quentin Tarantino, which premiered earlier in the same day.

"Parasite" also received a modest ovation from reporters from all around the world, although they came up with temperate reviews after Bong's request not to reveal plot spoilers.

"'Parasite' being the work of one of Korea's best regarded filmmakers, that simple-sounding setup is the cue for multiple darker twists, ingrained social commentary, and bouts of comedic violence," Patrick Frater, a reporter for Variety, wrote. "Picking individual winners would be difficult. Picking 'Parasite' as a contender for some kind of Cannes reward would not be."

"'Parasite' is generally gripping and finely crafted, standing up well as Bong's most mature state-of-the-nation statement since 'Memories of Murder' in 2003," it said.