SEOUL, May 22 (Yonhap) -- Juul Labs Inc. said Wednesday that its e-cigarette brand will be launched in South Korea later this week as the U.S. company eyes the burgeoning market here.

The Juul -- which packages nicotine salts from leaf tobacco into one-time use cartridges -- is to hit local shelves on Friday, the company said.

Rolled out by the San Francisco-based company in 2017, the Juul has become the most popular e-cigarette in the United States, with a market share of more than 70 percent as of September 2018.

At the end of last year, the e-cigarette maker established its South Korean subsidiary, Juul Labs Korea, in the run-up to its entry.

Amid controversies over how the Juul has encouraged teenagers to smoke through social media, the company said it will comply with South Korean regulations.

"We will not pursue any kind of social media marketing," Lee Seung-jae, CEO of Juul Labs Korea, told reporters in Seoul.

Seeking to alleviate concerns that its product launch may lead to increased smoking among adolescents here, Lee said it has the strictest online adult identification procedures on its official website.

The smoking rate for South Korean men aged 19 or older steadily fallen since 2008 to reach a record-low of 38.1 percent in 2017, government data showed. The rate remains considerably high compared with other developed countries.

Government data also showed that 6.7 percent of students in middle and high schools were smokers in 2018.

Juul Labs said it will introduce a product with a nicotine content of less than 1 percent, lower than the South Korean permissible level of 2 percent. Juul pods sold in the U.S. contain 3-5 percent nicotine.

Market watchers expect the Juul to spearhead the growth of the local e-liquid market as Philip Morris' heat-and-burn IQOS did.

The market for heat-not-burn products has grown sharply, accounting for nearly 10 percent of the country's total cigarette market. 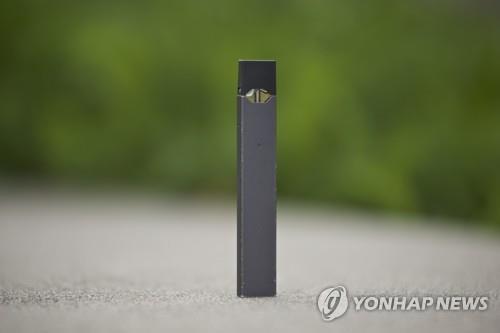 E-cigarette Juul to land in S. Korea this week

E-cigarette Juul to land in S. Korea this week